Locust Situation Nears Crisis Point; “We Must Tackle This Together” Says Mme Ravalomanana 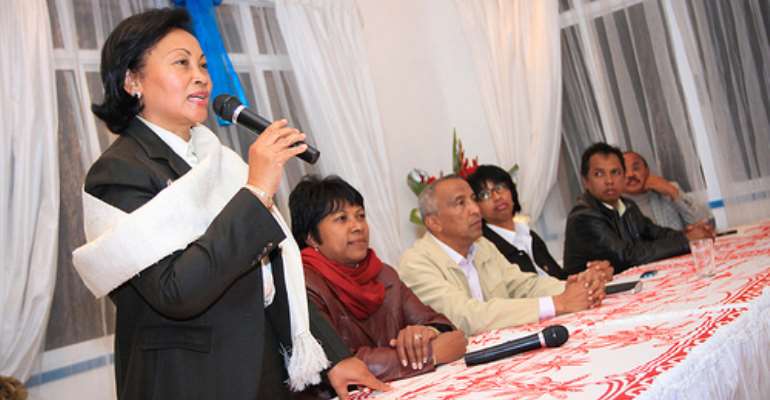 Presidential Candidate Lalao Ravalomanana has responded to the UN appeal for funds to control the locust plague threatening Madagascar, saying the country must unite in the face of this major environmental threat.

Last week, the The United Nations Food and Agriculture Organisation appealed for $22 million to tackle the locust plague that has already infested over half of Madagascar's cultivated land and pastures, threatening to trigger a severe food crisis.

Funding is needed to start a large-scale control campaign in time for the next crop planting season in September, the agency stated, adding that its emergency appeals for Madagascar remain "severely underfunded."

Mme Ravalomanana said: 'I have been deeply concerned by the current administration's failure to make the necessary investment to protect our lands. It has been more than half a year since the UN's Food and Agriculture Organisation recommended an increase in pesticide use to address the threat of swarming locusts - but nothing was done. The people of Madagascar are paying the price for this laziness.'

'The plague we now face poses a great risk to our food supply, for if it is left untreated, it will wipe out food crops and livestock grazing lands as well as a family's ability to provide for itself. I am told that losses in rice production, a staple for our people, could reach 630,000 tonnes - a quarter of the total demand.'

The FAO predicts that two-thirds of Madagascar will be infested with locusts by September, putting 60 per cent of the Malagasy people at risk. Its assessment mission on the impact of the current locust plague found that rice and maize losses vary from 40 to 70 per cent of the crop, with 100 per cent losses on certain plots.

Mme Ravalomanana continued: 'We are grateful to the UN for its efforts to support the Malagasy people in this time of need. But this is a crisis which could have been averted. We all know that many of our people depend directly on agriculture for food and income. Nothing is more important than protecting this - but failure to spend a little on preventative measures at the right time has turned a pest into a national crisis.'

'Under my presidency my government will take all precautions necessary to protect our land and the people who rely on it. Never again will we sit back and wait until the international community comes to our rescue. We must unite together to take responsibility for the livelihood of Madagascar's 22 million people and for the future of our children."