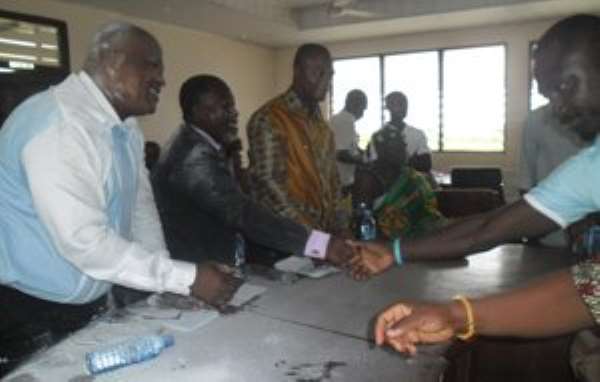 The District Chief Executive (DCE) for Gomoa West in the Central Region, Theophilus Aidoo-Mensah, who was nominated for the position for the second time by President John Dramani Mahama, has been confirmed by the assembly members at a colourful ceremony at Apam.

Mr Aidoo-Mensah is the first person to be confirmed out of the first five DCEs nominated for the region.

He polled 100% of the votes cast as all the 50 assembly members present voted for him.

The election was supervised by the Mfantseman Municipal Electoral Officer, Stephen Betino.

In his address, Mr Aidoo-Mensah thanked the assembly members for the confidence reposed in him. He promised to continue whatever project that has been left unattended in order to improve on the living standards of the people in the area.

The DCE called on the assembly members, chiefs and stakeholders to support him to ensure total development in the area.

The nomination of DCE'S, Metropolitan and Municipal Chief Executives has created a lot of controversy in the region, compelling some National Democratic Congress (NDC) Members to threaten to defect from the party if the President did not change some of the people nominated.

However, Mr Aidoo-Mensah is the only DCE whose nomination created no tension in the region.