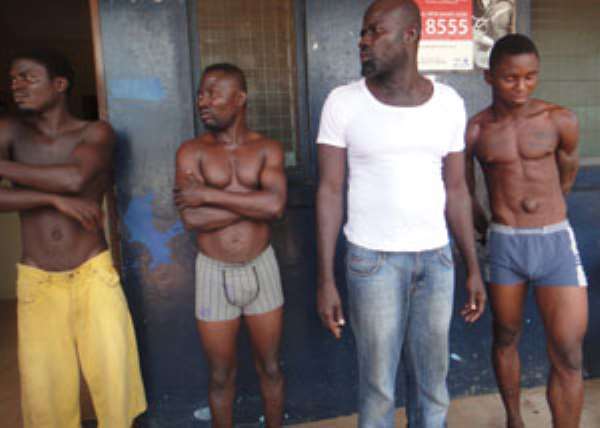 INFORMATION REACHING DAILY GUIDE indicates that the supposed installation of Naval Captain (rtd) Nii Ashitey Kamoah III, a member of Trebi We, a faction in the Teshie chieftaincy dispute, came off at a secret location last Thursday night.

'His real name is Amarh and he has made several attempts to impose himself over us since 1996 but we have resisted all such attempts because he does not hail from Teshie. He comes from Nungua,' some members of the youth group which resisted the kingmakers from the Ashitey We faction told DAILY GUIDE yesterday.

According to the youth, so far as they were concerned, the town has no chief and that they would not recognize Nii Kamoah as chief. This is due to the fact that before anyone ascends the throne, that person has to be sworn into office in public and not in secret.

'In the interest of peace, the Teshie Police Commander has asked that nobody holds himself out as chief so that we can celebrate our 'Homowo' come August, this year,' the youth further asserted.

However, Nii Kamoah III has been installed amidst heavy security, in secret. He is left with only a few rituals to perform to seal his authority and assume office.

Initially, the Lenshie Clan at Teshie where chiefs are chosen had three houses which rotated the ascension to the throne usually after the death of a sitting chief.

But owing to the misunderstanding between the ruling houses lately, there are now six houses, exacerbating further, any attempts to install a chief 'till thy kingdom come'.

It therefore seemed the only way  one could be installed as chief was through unfair tactics.

It would be recalled that there were brutal clashes Thursday morning between claimants to the Teshie stool in the town, resulting in the death of one person and leaving three people badly injured.

There was heavy security in the town after the incident, but the town has assumed its usual peaceful atmosphere since Saturday.

Seven suspected land guards who were allegedly hired by the Trebi We to provide security for the installation were grabbed by the police last Thursday as a result of the clash.

The Ashitey We youth have threatened to stage mayhem should the newly-installed chief attempt to assert his authority as chief of the town.

Though heavy security presence has restored calm to the area, it did not seem the crisis was over.

Nii Kwaobotswe, who claimed to be the Dzaasetse or 'kingmaker' from the Ashitey We house, has vowed to resist the newly installed chief.

'He can only decide to be a chief in the bedroom where he was allegedly installed but not in public.

'A chief who is recognised by the people is outdoored at 'Manjaanor', the public meeting place,' he stated.

'Let them dare bring out their chief and they will face the wrath of the people,' he vowed.

But Nii Kamoah III, reacting to the stance taken by the Ashitey We house, stated: 'I don't think they know what they are talking about. We have got traditions, customs and norms.'

According to him, the venue for a ceremony did not determine whether the ceremony was legitimate or not.

In an interview with myjoyonline.com recently, he noted: 'We have places for doing things but when it becomes necessary, you can move a ceremony. You can move an event to any place in the land.'

Meanwhile, six out of the seven suspected land guards who were arrested as a result of the clash have been remanded into police custody by the Osu Magistrate Court.

The suspects were charged with three counts of conspiracy to commit crime, causing riot and murder.  They were remanded into police custody by the court presided over by Aboagye Tando to reappear on July 2, 2013, for trial.

The seventh suspect, Akpo, aged 20, who was severely injured as a result of the melee, is still on admission at the Police Hospital receiving treatment.

DCOP CT Yohuno, the Greater Accra Regional Police Commander, has told DAILY GUIDE that his men would continue to provide security in the area until calm was totally restored.

He said the District Police Command and the Ledzokuku Krowor Municipal Authority, together with the Regional Minister are in constant talks with the three factions to settle the dispute amicably.