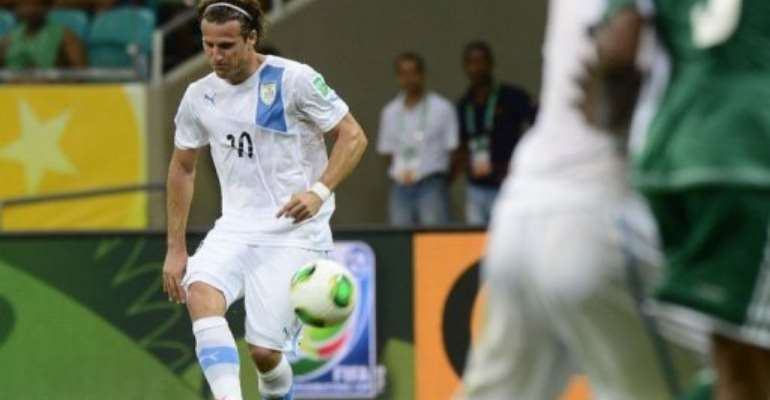 Uruguay forward Diego Forlan during the Confederations Cup match against Nigeria in Salvador on June 20, 2013. By Daniel Garcia (AFP)

The 34-year-old completed a sweeping move in the 51st minute on Thursday to score his 34th international goal, enabling him to reclaim the national scoring record from teammate Luis Suarez, who had equalled it in the 2-1 loss to Spain.

Captain Diego Lugano bundled Uruguay ahead in the 19th minute, only for Chelsea midfielder John Mikel Obi to equalise for Nigeria with a skilfully taken goal eight minutes before half-time.

Victory means group leaders Spain, who thrashed minnows Tahiti 10-0 earlier in the day, must wait to confirm their place in the semi-finals.

Nigeria and Uruguay will go into Sunday's final group fixtures level on three points, but while Oscar Tabarez's Uruguay are practically assured of victory over Tahiti, Stephen Keshi's Nigeria are obliged to tackle the mighty Spain.

"We're very satisfied. Ever since the draw, we knew this match was the most important match to play and we've made a huge step towards the semi-finals," said Uruguay coach Tabarez.

"We've not reached the semi-finals yet, but I think we're on the way."

Nigeria coach Keshi blamed the result on a lack of concentration that left Forlan unmarked for the decisive goal.

"I think my players played well and played to instructions," he said. "It was just one minute's lack of concentration that made the difference. Otherwise it was good."

Nigeria enjoyed the lion's share of support from a meagre crowd, who made their way to Arena Fonte Nova despite widespread protests in Salvador over the alleged misallocation of government funds, but it was Uruguay who made the early running.

Nigeria goalkeeper Vincent Enyeama had to turn a rising strike from Cristian Rodriguez over the bar in the first minute, and despite a brief flurry of Nigerian attacks, it was Uruguay who broke the deadlock.

Forlan's left-wing corner was cleared back to him and although his low cross lacked power and Edinson Cavani failed with an attempted back-heel at the near post, Lugano was on hand to scuff the ball home.

Nigeria continued to press forward boldly, however, and in the 37th minute they equalised with a delightful goal.

Mikel has only scored two goals in seven seasons for Chelsea, but he showed a striker's instincts to evade Lugano with a subtle feint before stroking a left-foot shot into the top-left corner.

Nnamdi Oduamadi, who claimed a hat-trick in Nigeria's 6-1 rout of Tahiti, had to go off injured after a foul by Egidio Arevalo Rios, but the African champions finished the half strongly.

It would have been 2-0 at the interval had Uruguay goalkeeper Fernando Muslera not shown sharp reflexes to tip over a header from his own defender Diego Godin that seemed destined to drop beneath the bar.

Nigeria began the second period just as gamely, but six minutes in, Forlan struck with a goal of luminous quality involving all three of Uruguay's attacking stars.

Suarez advanced down the inside-right channel and knocked the ball inside to Cavani, who immediately swept a pass wide to Forlan, and the man of the hour watched the ball come across him before bludgeoning an emphatic left-foot shot past Enyeama.

Cavani should have twice stretched Uruguay's lead, blazing wastefully over when clean through in the 70th minute and then heading off-target from a Forlan free-kick, but Nigeria were unable to profit.