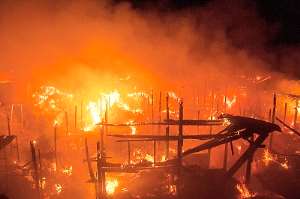 The security agencies have also been able to foil attempts to burn another market in the country, the government claims.

Briefing journalists at the Flagstaff House Thursday, June 20, 2013, Deputy Information and Media Relations Minister Ibrahim Murtala Mohammned said, investigations had confirmed that while some of the fires were accidental others were deliberately caused by some arsonists as President John Mahama suspected.

He would however, not give further details. According to Murtala Mohammed, some fifteen persons suspected to be behind the recent murders in the Ashanti Regional capital of Kumasi have also been arrested.