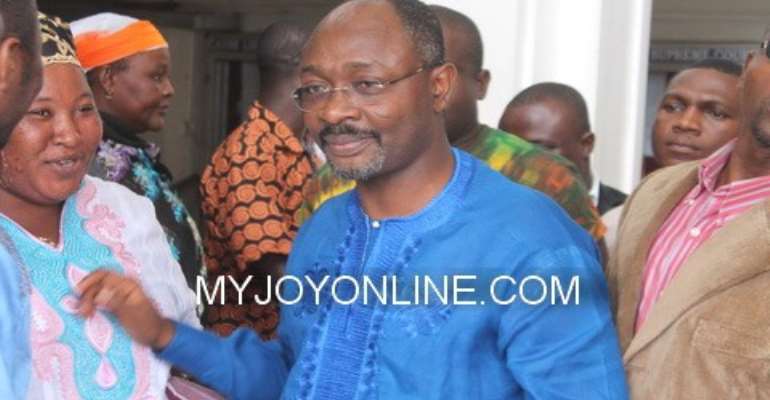 Reginald Seth Dogbe, chief aide to embattled businessman Mr. Alfred Woyome, is demanding that Minority NPP in Parliament behave in a more mature manner, as legislators, when discussing issues related to his boss.

The Minority in Parliament Wednesday held a press conference and asked the Attorney General to compel Mr. Woyome through the courts to deposit the 51 million cedis judgement debt paid to him pending the outcome of the state's case against him.

But Mr Reginald Dogbe told Joy News the call was “prejudicial” as well as “shocking and laughable”.

He criticized the MPs whom he said are supposed to believe in the rule law to pass such comments and wondered how their demand can be supported by law.

He suspected that the NPP MPs are running away from their own shadow after the Supreme Court ruling against Waterville Holdings last week. He said the ruling is dawning on the NPP that they entered into illegal contracts with companies including Shanghai Construction Group in 2005, and the press conference was to shy away and divert attention from those deals.

“They found out that the ruling by the Supreme Court is catching up with them simply because they did not send the [Shanghai] contract to parliament for parliamentary approval and yet they were able to award contracts to Shanghai Construction Group”.

He claimed the press conference exposed the MPs as not being “honourables” and advised them to act in way deserving of members of the August House.

“They should stop this childish game and diversionary tactics,” Reginald Dogbe asserted.

But NPP MP for Obuasi Kweku Kwarteng told Joy News the Minority's intention was to facilitate the sentiment of Ghanaians who want illegal monies paid to individuals and companies retrieved.

He noted that there are growing concerns among the populace that government has not "displayed any willingness" to get these monies back. “People want government to show more seriousness,” he said.

He said their call is also informed by the failure of the Attorney General to obey court's ruling that Mr Woyome should be paid only GH¢17 million out of GH¢51 million judgement debt pending an appeal. The government went ahead to pay the full amount, he recalled.

“The judgement debts were dubious and we want the government to show a little more commitment,” he reiterated.

Mr Kwarteng stated that the Attorney General apparently went to court in 2010 in the case against Waterville but it took Martin Amidu, a private individual, to “bypass” them and get judgement for government.

Meanwhile, the NPP's call has received the backing of a legal practitioner, Kingsley Yeboah.

In his view, the call is not “wrong”, rather “proactive” to ensure that the possible guilty party does not “dissipate all the resources” before judgment is attained.

Play the attached audio above to listen to the various submissions