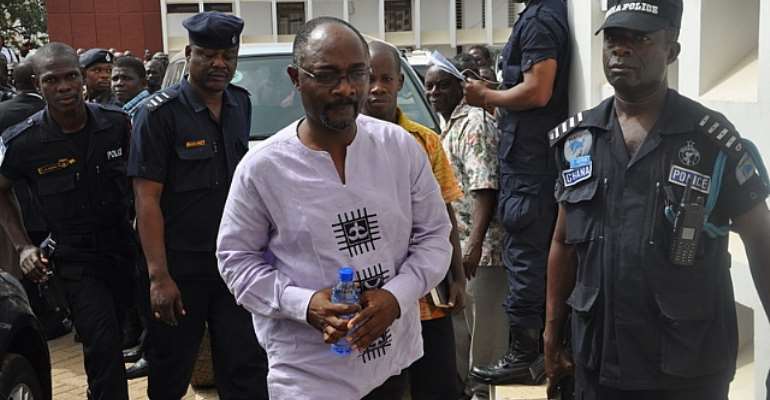 Here we go! More grease to the elbows of Brother Martin Amidu, the sole Ghanaian vigilante who by his resolute determination to retrieve the money so fraudulently obtained by Alfred Agbesi Woyome has today brought smiles back on the face of Ghanaians.

Upon hearing the guilty verdict, whilst the friends and sympathisers of Alfred Agbesi Woyome are fretting, he is fidgeting. He will also be found guilty by the High Court. He will not only be compelled to refund the money but also, do time in prison, a crook and a swindler as he is.

I had vowed to see Alfred Agbesi Woyome found guilty, refunded the money so dubiously obtained from the State back to the State and sent to prison. I stand vindicated today thanks to God, Brother Martin Amidu and all discerning and well-wishing Ghanaians.

It is not only Woyome who is currently disturbed but also, former Attorney General Betty Mould-Iddrisu. I have said it elsewhere and will say it again that she profited from the money she dubiously facilitated its acquisition to Woyome. It may not take long for Woyome to mention names of all those that profited from the money.

Those people are known but we want him to mention them himself. He did transfer money through the banks into their bank accounts instead of giving them physical money so the bank paper trail is there to expose all those with whom he shared the money.

I have other things to write about so I shall end here but not without mentioning the name of Hon. Kennedy Agyapong, the first Ghanaian patriot to bring Woyome's thievery into the public domain. More grease to his elbows. Rockson Adofo, that fearless son of Kumawu/Asiampa, Nana Akrasi Sarpong, the internet columnist resident in the US, Ghanaweb, Modernghana.com, SpyGhana.com and the entire Ghana media and all discerning Ghanaians have contributed towards making it possible to see Woyome found guilty sooner.

'Throughout history, it has been the inaction of those who could have acted; the indifference of those who should have known better; the silence of the voice of justice when it mattered most; that has made it possible for evil to triumph.' In this very case, many people acted hence, the positive results we are seeing today.

I dedicate this article to Brother Martin Amidu and Hon. Kennedy Akompreko Agyapong. I am sure President Mahama and the NDC have started shuddering at this guilty verdict pronounced on Waterville why because, Alfred Agbesi Woyome, their sole financier, will consequently be found guilty.