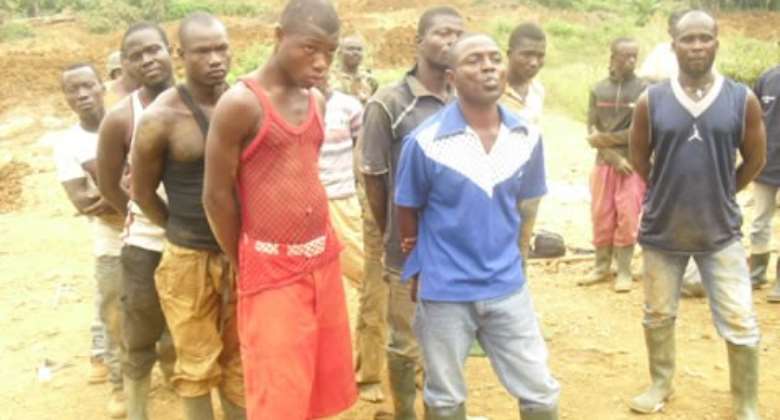 File photo: Some illegal miners arrested in the Eastern Region

A small scale miner is daring the Inter-Ministerial Taskforce on illegal mining to go after chiefs who take huge sums of money to cede off lands to miners.

According to Kofi Boateng, the current drive to flush out galamsey operators would yield no positive results if the root factors are not critically assessed and the exercise prudently managed.

He says the arrest and prosecution of individuals engaged in illegal mining should be not exempt traditional rulers who directly benefit from such activities.

“They should go to the chiefs who personally sold the land to individuals… and even some of the chiefs go ahead and take money from these people and tell them 'leave the pit, I will reclaim the land for you' but they don't do it; I have never heard the arrest of one single chief on this particular issue”, he told Luv Fm at a public forum on small-scale mining in Kumasi.

The forum, on the theme: “Optimizing the Developmental Benefits of Small-Scale Mining Sector” was organized by the Third World Network – Africa (TWN-Africa) with its associates in the National Coalition on Mining (NCOM).

Participants, including officials of the Environmental Protection Agency (EPA) and the Minerals Commission as well as environmental NGOs and other interest groups discussed the challenges confronting small-scale mining in Ghana and opportunities to optimize potentials in the sector.

Mr. Boateng, who operates in the Amansie Central District of Ashanti, employs about 45 Ghanaians and other five Chinese. He claims to be losing his $6million investment due to the modus operandi of the taskforce.

He argued that small-scale mining has considerably reduced youth unemployment in the country, stating that the situation can be properly managed if authorities put in place proper regulatory measures.

Mr. Boateng is therefore urging government to reconsider its decision to chase Chinese illegal miners out of the country. due to their expertise to help develop capacities in the small-scale mining.

Environmental degradation caused by illegal small-scale miners has called into question the impact of small-scale mining industry on the economy of Ghana.

The government in reaction set up the taskforce to tackle the situation.

The National Coalition on Mining is demanding that an immediate moratorium be placed on the granting of new reconnaissance and exploration licenses and mining leases for large scale gold mining.

The group believes that “the more land is given to large scale mining operators, the less there would be for potential utilization by small-scale operators”.

According to the Ashanti regional manager of the EPA, Isaac Osei, there have been recommendations for the registration of small scale miners to be decentralized to speed up the process of issuing permits.

He also expects the government to take up the challenge of reclamation of all degraded lands to pave way for the new era of small-scale mining regularization.