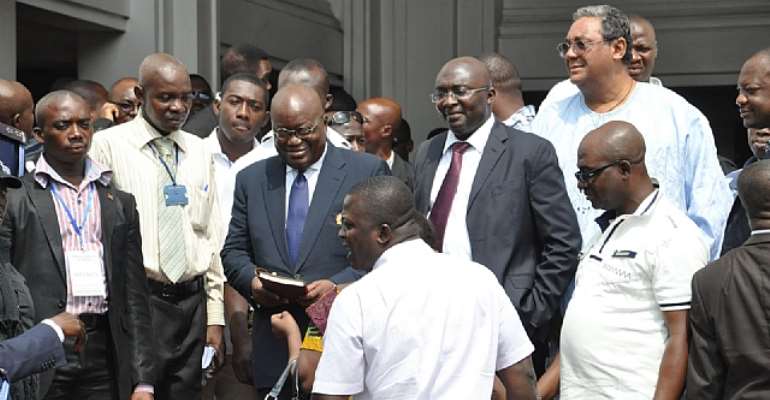 By Gordon Asare-Bediako
After failing obviously to split the ranks of the opposition New Patriotic Party (NPP) with concocted posters of Alan Kyeremanteng, operatives of the National Democratic Congress have schemed and initiated a process to release fake posters of both Nana Akufo - Addo and Dr. Mahamudu Bawumia, who are both petitioners in the on-going Presidential Election Petition at the Supreme Court and who are both popular as Presidential candidate and Vice presidential candidate in the NPP.

Information gathered by the paper from the echelons of power within the NDC and also at the printing house where the posters were printed indicated that the posters of Dr. Mahamudu Bawumia, whose popularity has particularly soared after his appearance as main witness for the petitioners was printed with one of the several pictures of the running mate to Nana Akufo -Addo, which are found on the internet, in one of the printing firms owned by an NDC guru in Accra, would be unveiled in the coming days with the motive of breaking the front of the NPP and more importantly diverting public attention from happenings at the Supreme Court especially the cross examination of the Electoral Commissioner, Dr. Afari Gyan, by lead counsel for the petitioner, Philip Addison, which has so far turned into a nightmare for the respondents.

The release of this poster bearing the image of Dr. Bawumia with the inscription 'Bawumia for 2016', would be followed some days after with a separate poster of Nana Akufo-Addo, with the inscription 'Nana Akufo - Addo for 2016, We Shall Overcome'. The posters, purported to belong to Nana Akufo-Addo were also being printed in the same Accra based printing house belonging to the NDC guru.

It would be recalled that at the onset of the petition hearings, posters of Alan Kyeremanteng who was the main contender to Nana Akufo-Addo in the last two primaries of the NPP (2007 and 2010) which supposedly were his posters for an upcoming 2016 flagbearership campaign. These posters however did not generate the needed impact for the schemers as it attracted very little attention and failed to sway any momentum whatsoever from the court case partly because it was immediately realized to be the work of elements within the NDC.

However, the paper understands that operatives of the NDC see this as the best time to put out separate posters of the two NPP leaders to create diversion and create the impression that both personalities are gunning for a run for the flagbearership for 2016.

According to our source who works at the printing house where the posters were designed and printed, 5000 posters were printed for each set of the two posters. Our source also tells us that the posters were ordered in late April but that printing was supposed to have been completed in the third week of May.