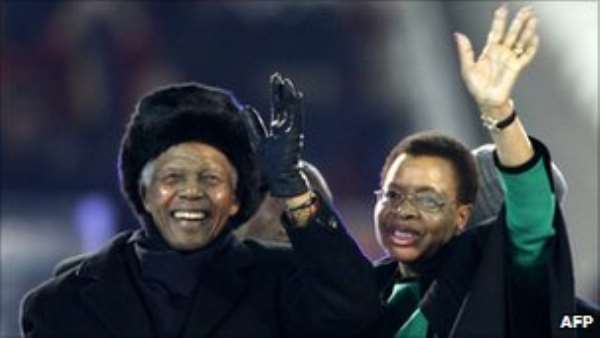 Receiving the book on his behalf, Dr Makaziwe Mandela (60), the oldest surviving child of Nelson Mandela recounted her lineage and what defined his father.

'The name Mandela originated from our great grandfather Mandela, who was born in 1820. He was the son of King Ngubengcuka, the fourth Monarch of the aba Thembu. Mandela gave birth to Chief Mphakanyisa Henry Gadla Mandela, and he gave birth to our father Rolihlahla Nelson Mandela. It is also so that Nelson Mandela's development, beliefs and convictions, including his principled stand on inclusivity were derived from sitting at the feet of his elders. It is this African value that has made him the world icon that he is today.'

Ama Commey , the 11- year- old daughter of the author Pusch Commey quipped on presenting the book. ' That will make Nelson Mandela the last great African King. Number 100. Isn't that so Daddy?'

The first volume covers 10 illustrious Kings and Queens with breathtaking original illustrations. They range from the alluring Cleopatra V11 of Egypt to the richest man who ever lived, Emperor Mansa Musa of Mali. According to Pusch Commey, there are 9 more volumes of 90 Monarchs to come, who like Mandela, were magnificent examples of leadership, as well as great representatives of Africa. The book was written to inspire the continent. It has been adapted as The Glory of African Kings and Queens , for children.

' The House of Mandela will carry this torch with pride. My career background is that of a social worker. Working with children has been my passion' said Dr Makaziwe Mandela

She added ' The greatest service to Tata's (father) memory is what he sacrificed for , and what was dear to his heart; a better non-racial world for all children, our future. The past is behind us. We learn our lessons from thepast. For many years he celebrated his birthday parties with a host of children at his hometown in Qunu. In his old age he has been surrounded by his children, grandchildren and great grandchildren. '

As the immense legacy of the icon is pondered, Makaziwe is in no doubt where that legacy is going to be invested.

The book 100 Greatest African Kings and Queens is currently available online at www.amazon.com and all major online bookshops. Hardcopies are available from Real African Publishers (www.realafricanpublishers.com), who also published the bestselling Tastes from Nelson Mandela's Kitchen. Nelson Mandela's royal book gift launches in Johannesburg in September for distribution to bookshops globally, to be followed by launches in various capitals around the world.