My visit to Japan will yield results - Prez Mahama 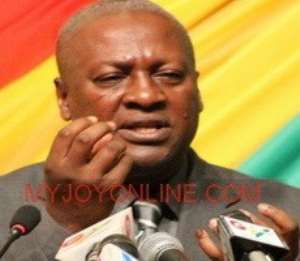 President John Dramani Mahama has expressed optimism that his visit to Japan will yield positive dividends for Ghana in the next few months.

In a pre-departure interview with journalists in Yokohama, Japan, the President said his visit had been "fruitful and beneficial".

He said during his stay in Japan, he was able to hold important discussions with Prime Minister Shinzo Abe, Japanese government officials and the business community.

He reiterated that Japan had decided to fund the construction of a new suspension bridge across the Lower Volta River at Atimpoku to replace the existing Adomi Bridge, which has become weak.

The construction of the bridge will be the first project to be funded by the Japanese Government from the soon-to-be-reactivated Yen loan.

Significantly, President Mahama said, Ghana was one of the few African countries which had been selected by the Japanese Government to benefit from a $32 billion package to support infrastructure development, economic growth and human development in Africa over the next five years.

He also leveraged his relationship and networking with the Japanese elite and diplomats with meetings with former Japanese ambassadors and political officers with whom he had worked at the Japanese Embassy in Ghana.

He also held meetings with a number of Japanese infrastructure project companies, the Japanese Trade Minister, the President of the Japan International Cooperation Agency (JICA), Mr Akihiko Tanaka, and the Presidents of Togo and Benin, Faure Gnassingbe and Thomas Boni Yayi, respectively.

At the well patronised second Hideyo Noguchi Africa Prize Awards attended by the Emperor and the Empress of Japan, President Mahama was selected to deliver the congratulatory message to the two prize winners.

He also held a one-on-one meeting with Emperor Akihito.

The President also met with the Ghanaian community in Japan and told them that he was committed to growing Ghana's economy to make life more bearable for the people.

He expressed the hope that the improved situation would even encourage Ghanaians abroad to consider returning home for investment or resettlement.

The President said his meetings with chief executive officers of some Japanese companies had whipped up the interest of Japanese investors in Ghana's energy, oil and gas sectors.

Some of the companies, he said, also proposed to channel their investment into agriculture, agro processing and water management.

President Mahama said Japan wanted to open up more with Africa to increase trade ties and noted that the relationship between Africa and Japan was going to be a win-win situation in terms of job creation and revenue.

The First Lady, Mrs Lordina Mahama, also participated in a number of meetings, including an HIV & AIDS symposium in Japan.

On his visit to France, the President said it afforded Ghana and France the opportunity to build on their relationship.

At a meeting in the Elysee Palace, Presidents Mahama and Francois Hollande of France discussed trade and development assistance to Ghana, improved military cooperation, security and democracy in West Africa and the Sahel regions of Africa, conflicts, terrorism and the need for Ghana to take advantage of its presence within a Francophone bloc to enhance the teaching and learning of the French language.

Touching on his participation in the African Union's (AU's) 50th anniversary, President Mahama said he and the other Presidents had reviewed the progress of Africa in the last 50 years and planned the continent's forward march over the next decade.

President Mahama's three-nation visit first took him to Ethiopia, where he participated in the 50th anniversary of the AU, then France and Japan.