Most biogas plants tell a dark tale of neglect in Bharawan 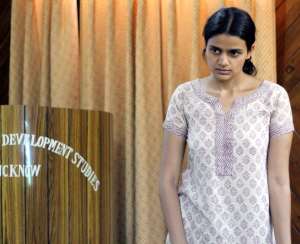 Despite acute power shortage in rural areas, varying levels of poverty and impoverishment, why is, government's heavily subsidized programme to encourage people in rural areas to install biogas and manure plants for renewable energy production, not an outstanding success? Engineer Surabhi Agarwal, MTech from IIT Kanpur, studied biogas plants installed in the past decade or more in four villages of Bharawan block in Hardoi district in 2013 to find the status of these plants, record experiences and challenges if any. She presented her study findings in a meeting held in Giri Institute of Development Studies in Lucknow.

The Government of India had initiated a National Biogas and Manure Management Programme (NBMMP) in 1981-82 to increase awareness of and access to this technology. Biogas is a fuel produced by decomposition of organic matter in absence of air, and is composed mainly of methane and carbon-dioxide. It can be produced inside a biogas digester which is essentially an airtight container in which organic waste such as cow dung and plant material is decomposed to produce biogas. This biogas can be used directly to run biogas appliances, such as stoves and lanterns, or to generate electricity. After the decomposition is complete and the biogas has been extracted, the leftover waste material is a wonderful form of organic fertiliser, rich in nutrients and conducive for the development of soil microorganisms. A biogas digester also allows for more effective waste management since all organic waste may be used for biogas production, thus reducing the quantity of waste required to be disposed of in landfills. Surabhi works out that a unit biogas plant can provide enough energy cooking 3 meals for a family of 5-6 people, or for lighting a 60-100 watt bulb for six hours, or other such uses.

Surabhi's study, which was supported by The Hummingbird Project, and Asha Parivar, clearly found that implementation of NBMMP has left a lot to be desired. Surabhi obtained a list of installed biogas plants and visited each one of them in Bharawan block. She went to four villages: Godwa, Bhamrauli, Jajpur, and Parsa. She visited 14 biogas plants and reviewed this status. Out of 16 biogas plants in the list, 13 were not functional anymore, 1 plant was working but at suboptimal capacity. 2 entries on this list were fake as no biogas plant was found on stated site.

Surabhi told Citizen News Service - CNS that on an average she found a plant survived for 4.1 years of operational life, which is a big setback to alternative energy programme.

Despite government offering to share half the cost of repairs with beneficiary, old and non-functional plants were not repaired and put back in use. People interviewed by Surabhi were not able to identify exact reason for plant not working but some reasons mentioned were: leakage in drums, plant stopped producing gas, shortage of enough cattle and thus organic waste, or the collapse of plant after construction.

Ramon Magsaysay Awardee and noted social activist Dr Sandeep Pandey said that they tried to locate the maintenance person who instead of helping those who are struggling with biogas plants was instead doing alternative tasks in state capital of Lucknow as per the command of his higher authorities. So lack of serious government will to promote alternative energy is another obstacle. Overall there are only four maintenance technicians in the entire state of Uttar Pradesh.

Based upon her interviews, Surabhi recommended that there is a need to provide maintenance support to those opting for biogas plants. A sustainable option of maintenance and repair service provision needs to be worked out. One participant suggested that maintenance experts can do periodic inspections.

Most people who got the benefit of NBMMP were reasonably well-off financially in their villlage's context. Professor Dr Surinder Kumar, Director, Giri Institute of Development Studies, said that if financially weaker sections had benefitted from this scheme and installed these plants, then they would have tried to sustain it as benefits would have meant a lot to them than those who were financially better off and had other means to access energy and non-functioning biogas plant did not affect them to a great extent.

Dr Sandeep Pandey, a former faculty of IIT Kanpur and IIT Gandhinagar, shared another example from Bakshi-ka-Talab area near Lucknow where a biogas manure plant runs very successfully on human excreta. For this programme to be successful government has to prioritise it first, said Dr Pandey. China meets 5% of its energy needs through biogas, then why cannot we?

Surabhi's study is just a step towards mobilising a growing response to push for promoting alternative energy options in the state. Dr Pandey said that they will take this study outcome forward till plants become operational again. It is not the technology of biogas that is failing in UP rather the poor way it is being rolled out. When electrician is available for repairs and maintenance all across the state then how come biogas technicians are not available when it is a cheaper and more sustainable option to meet our energy needs?

Bogoso explosion: Gov’t will do everything to restore normal...
57 minutes ago