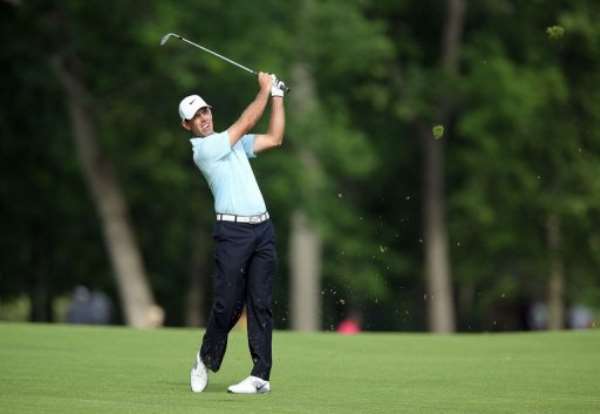 DUBLIN, Ohio (AFP) - South Africa's Charl Schwartzel piled up 10 birdies in a seven-under par 65 on Thursday to seize the first-round lead at the US PGA Tour's Memorial, where defending champ Tiger Woods was six adrift.

Former Masters champion Schwartzel bounced back from a double-bogey at his penultimate hole to birdie his last, taking a one-stroke lead over American Scott Piercy.

World number one Woods, seeking a sixth Memorial title, played in the afternoon when birdies were harder to come by. He had five birdies and four bogeys in a one-under 71, but ended his day on a down note with a bogey that left him tied for 27th.

"I didn't score very well compared to how I hit it," Woods said. "I hit it pretty good. I just didn't make anything today.

Chinese teen Guan Tianlang just missed out on joining the group at one-under. The 14-year-old amateur sensation was two-under through nine holes and one-under after a bogey at 16, but closed with a bogey to lie tied for 41st on even par.

Schwartzel was delighted to avoid a disappointing end to his productive day.

"The birdie on the last definitely will make my evening a lot better," he said. "I felt like I played really well, just ... sort of ticking the ball over and got it to eight-under. Just had a bad one on number eight, made a double. And that was the very worst I played all day."

After teeing off on 10, Schwartzel picked up his first birdie of the day at 11. But after a bogey at 13, where he three-putted from seven feet, he decided to go back to a putting grip with his finger extended down the shaft -- having reverted to a conventional grip on the advice of Presidents Cup International Team captain Nick Price.

The move paid off immediately, with birdies at the next four holes.

"It felt really shaky. I switched back to my finger down the shaft and sort of changed the ball position ... and that felt comfortable.

"As you know, putting is all about comfort at the end of the day," he said.

Schwartzel did plenty of good work otherwise, hitting all but one fairway and two greens in regulation.

He had a one-stroke lead over American Scott Piercy, whose eight birdies included a run of five in a row starting at the par-three fourth.

Piercy, who has never finished better than 48th in the Memorial, hosted by Jack Nicklaus, said his determination to pull out his driver less had paid off.

"I've hit a lot of drivers and kind of pounded down golf courses, and I haven't had much success here doing it," he said. "I thought I'd hit a lot of three-woods today... maybe I'm getting older."

Piercy was one stroke in front of a group of four players on 67: South Korean Charlie Wi and Americans Josh Teater, Russell Henley and Kyle Stanley.

BoG, IGP clash over attack on bullion vans
19 minutes ago