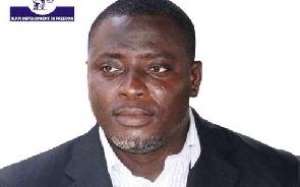 They say two wrongs do not make a right hence why fume against Ghana's young version of the US's Federal Bureau of Investigation for flouting the laws of the land. With the exception of few incidences, no Ghanaian should be detained without access to his/her attorney or family let alone starve and imprison him/her at a secret location. This is abuse of [political] power by all standards. The suspect must be presumed innocent until proven guilty; is that not what our laws say? So why then is the rush to 'kidnap' him and show off who is in-charge. Ghanaians already know who is in charge so that signature move of intimidation is uncalled for. Thank you.

No one in his Ghanaian mind supports the fake nude pictures of the President of Ghana or any other ordinary citizen, and as such, we all condemn anybody's involvement, being it Mr Michael Omari Wadie or whoever. That said, if there are laws that protect such public ridicule then why can't the police enforce them but the Bureau of National Investigation (BNI)? What is national about violating an 'offensive conduct?' Come on, where was the BNI when some Ghanaians (NDC and NPP alike) made mockery of previous leaders and presidential candidates? Couldn't the police who are law enforcers book the alleged suspect of the most recent saga of this traditional NPP-NDC tactics of causing digression of national issues?

So who made the decision to arrest Mr Michael Omari Wadie? On what basis is this issue a national investigation but NOT similar mockery photos of Prof. Atta Mills (deceased), former President Kuffour, and notably among them, the New Patriotic Party's presidential candidate, Nana Akuffo-Addo? We understand somebody or someone in power should 'cause a scene' to send a message but does the irritating sound of the house fly require the use of the Nation's stealth bomber to send a message? If that was the goal then I am afraid it has failed miserably. The same Ghanaian people that condemned the release of such photos and disregarded its impact against the President's reputation are now sympathizing with the alleged suspect; for a good reason! They also see the abuse of power by an institution controlled by government and can read the political witch hunting under the carpet. I love Ghanaians, and I am proud to be a Ghanaian. Most Ghanaians, including myself, pass judgment not on political basis but on equitable justice. I am a living proof of the modern Ghanaian of our generation. Once NPP fanatic, became independent and still independent, yet supported the course of NDC and now I condemn NDC for masterminding the use of a sledge hammer to kill a fly!

BNI should know its history and the role it has played in the past to serve previous governments interest and torture chambers. I was raised in Burma camp back in the days so I know first-hand how this institution was (is) used to service and achieve political goals rather than fulfilling the purpose in which it was established; national investigation. Where was the BNI when millions were been looted to Chief Woyome? Where was the BNI when corruption was at its peak? Anytime we hear of BNI, it is always about torturing people or hiding people from their families and lawyers. When you think National Security Agency (NSA) has become the worse of our security apparatuses then BNI jumps in to claim its rightful position of being nothing but human right abusers!

I call on the NDC government, of which I have recently supported with my opinionated articles, as a matter of urgency, to stop prosecuting Mr. Michael Omari Wadie as charged. I am NOT defending his innocence but because the BNI has tainted the process with its signature human rights abuse. Therefore, any further pursuit of the case will be interpreted as political witch hunt and that could significantly affect the government chances of being maintained IF, and very likely, the Supreme Court orders re-election. Ghanaians were quick to use the political witch hunting case of Tsatsu Tsikata against NPP and voted for the NDC in 2008. A word to a wise

I am expecting NDC fanatics to jump on my view and call me NPP supporter. Each time my views condemn NPP or NDC the other party calls me a spy, bias, traitor, etc.