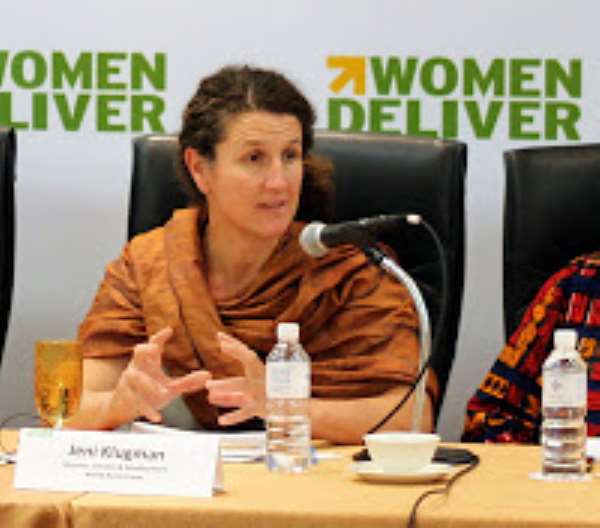 A new World Bank report released at Women Deliver 2013 in Kuala Lumpur, Malaysia, demonstrates that investing in women's reproductive health is smart economics. This report, formally called "Investing in women's reproductive health: Closing the deadly gap between what we know and what we do", Jeni Klugman from World Bank said that women are important contributors to the global economy: about 40% of the global labour force and more than 60% of workers in agriculture in sub-Saharan Africa are women.

Poor health reduces labour supply and contributes to lost wages, so improved reproductive health outcomes can increase female labour supply and productivity and therefore should be of great concern to policy makers.

The extent and nature of women's and girls' agency including the power to make decisions and to challenge authority, has major ramifications for their reproductive health. Jeni Klugman from World Bank said that ability to decide strategic life choices are expanding but still there is a very long way to go. Jeni Klugman further added that almost four in ten women have no say in decisions related to their own healthcare.

Perceptions need to change too, for example, Jeni said that 16-18% of people in the former Soviet Union, felt it is morally wrong for women to use contraception to delay marriage for her education or career. This share exceeds sixty percent in some countries!

The quality of data is very important to monitor progress especially in countries where maternal mortality rates are alarmingly high. However these are the very countries where data or indicators related to women and girls are missing! Jeni shared that 64 out of 75 countries with worst maternal indicators do not have data on skilled birth attendant and other indicators.

Jeni added that education is a primary vehicle for bolstering girls' agency. In Kenya providing school uniform significantly reduced their likelihood to drop out of schools.

Legal and institutions reforms for supportive policy environment for women and girls are also very much needed in many countries around the world. Legal reforms are not enough without robust enforcement, said Jeni. There were challenging legal barriers in many countries which prevent expansion of women's agencies, such as in some countries women cannot sign a contract, be mobile or get a job, among other restrictions. Jeni said that in India we have data on inheritance laws and their positive impact on improvement in women's lives.

If we build strong health systems then people do not have to choose between choosing healthcare or feeding their families or educating their children.

According to this report, for every maternal death, many more women suffer maternal morbidities, especially in developing countries. Evidence from Bangladesh has documented the losses in productivity from maternal health conditions, in particular for severe complications of pregnancy. Maternal mortality and morbidity imposes costs in terms of foregone earnings, and also means that family members need to absorb the work done by women inside the home, which might reduce their own ability to exploit outside economic and educational opportunities.

High fertility can also affect female labour supply. Over time as fertility has declined women have tended to become a larger share of the labour force, most notably in Latin America and the Carribbean where female labour force participation rates surged by 15% over the past decade, and at the same time the total fertility rate decreased by almost 11%. Globally female labour force participation decreases with each additional child: by about 10 to 15 percentage points among women aged 25 to 39 and about 5 to 10 percentage points among women aged 40 to 49.

According to this report, an estimated three million girls in 15-19 years age group undergo unsafe abortion each year and in low- and middle- income countries, complications from pregnancy and childbirth are the leading cause of death among girls in the same age group.

If women are able to better control their fertility through for example access to family planning, then as girls they can also stay in school longer, accumulate more skills, and eventually earn higher wages. Legislation of abortion which leads to reduced total fertility has also been linked to higher female labour force participation.

This report provides further evidence: In Bangladesh, the age of menarche (beginning of menstrual cycle) influences how long girls remain in school by delaying marriage. In Colombia, when family planning programmes were expanded from the mid-1960s, women were able to delay their first birth, enabling more schooling and making them more likely to be employed in the formal sector.

Hence early pregnancies - especially among school-aged girls- may reduce future earning potential. The relations between fertility, schooling and economic opportunities run both ways: not only does lower fertility potentially improve economic outcomes, but also better economic opportunities may reduce fertility rates. This is illustrated by a recent randomized experiment in India that helped to provide work opportunities for young women to enter the call centre industry. This led to fewer women getting married and to more women reporting wanting fewer children.

Evidence is accumulating that poor maternal health imposes important economic burden on households. A study in Bangladesh has documented large reductions in household resources associated with poor maternal health outcomes, most of which were driven by large health expenditures. In Ghana and Benin, the costs of complications at delivery cost represented an estimated one-third of the annual household cash expenditure. In Burkina Faso, women with more severe obstetric complications reported more frequent sale of assets, more borrowing, and slower repayment of debt in the following year. In Yemen, in a survey of women who had suffered previous reproductive morbidity, 43% reported having to sell assets or take out a loan in order to pay for their care. While poverty is a contributing factor to maternal mortality, there is also evidence that it further impoverishes households. A study in China shows that the direct health expenditures of a maternal death were more than six times higher than those with a successful birth outcome.

In sub-Saharan Africa at least, it has been shown that there is a negative relationship between high levels of maternal mortality and gross domestic product (GDP).

Previous research has suggested that income per capita, female education, the rate of skilled attendance at birth, and health expenditure are all correlated with levels of maternal mortality.

Jeni Klugman said to Citizen News Service - CNS in a press conference at Women Deliver 2013 that there are major economic returns apart from intrinsic health benefits of investing in women. Improving the reproductive health of women around the world is vitally important not just for the health benefits that will ensue but also for the substantial social and economic benefits for women, their families, and their communities.