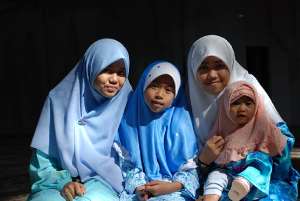 A girl in Malaysia today is more likely to go to a university than a boy. '65% students enrolled in tertiary colleges are women' said Malaysian Prime Minister Dato' Sri Haji Mohammad Najib bin Tun Haji Abdul Razak at Women Deliver 2013. While many countries are grappling to bring down deaths of women during pregnancy and child birth, Malaysia's maternal mortality rates have dipped down by nearly half today compared to what they were in 1990. And undoubtedly Malaysian economy is strong in the region (USD 1 = RM 2.84).

If Malaysia can turn the wheel then why cannot other countries? This Women Deliver reminds CNS of its coverage of previous 2010 Women Deliver where UN Secretary General Ban Ki-moon said: 'Women Deliver 2010 was critical in showing that investing in girls and women is not only the right thing to do, it is also good for the economy and good for society.'

Perhaps countries are not investing enough to ensure a life of dignity and equality for all human beings regardless of their biological sex. Malaysia responded in a coordinated way to strengthen its response to reduce the gender-based inequalities that dis-empowered women by a range of measures that included increased access to education, healthcare, employment, among others for girls and women.

Since most maternal deaths were caused due to shortage of sanitized standard medical equipment and trained midwives to assist women in need of sexual and reproductive healthcare services, this scenario has been overturned considerably with Malaysia reasonably building its network of trained midwives and well-stalked standard reproductive health services across the country. However all is not ideal in Malaysia as there are clear gains made but there are certain areas where Malaysia is trailing behind many countries.

For example, child marriages. In late February 2013, a 40 years old man was charged in Malaysia with rape of a 13 year old girl. Following the assault, the man reportedly took the girl as a second wife with consent of his first wife and the victim's parents.

Through early marriage, the rights of a child victim to health - emotional, physical and psychological health - education, and protection are seriously compromised. Child marriage is clearly one area where Malaysia and all other countries need to progress much more than ever before. Another possible area for Malaysia should be to expand gender justice initiatives to include other genders.

There are other measures too to improve quality of care and services for girls and women, as well as men and boys. National Population and Family Development Board (NPFDB) of the ministry provides services to help people of all ages in Malaysia to have better quality of life among families (CNS visited NPFDB centres in Kuala Lumpur and we will publish a more detailed report later).

Kate Gilmore, Deputy Executive Director (Programme) of United Nations Population Fund (UNFPA) said in a high-level media forum at Women Deliver 2013 that despite progress, 350,000 women continue to die 'because they are giving life.' 1 in 3 girls get married by age of 18 and 1 In 9 girls get married by age 15. Child marriage and maternal health are inextricably linked. Complications in pregnancy and childbirth are the leading cause of death for girls aged 15-19 in the developing world, 90% of births to adolescents aged 15-19 years take place within marriage.

'Girls Not Brides', is emphasizing that if international community is to accelerate improvements in the health of women and girls worldwide we cannot ignore the impact of child marriage. Child marriage encourages the initiation of sexual activity at an age when girls' bodies are still developing and risks of pregnancy and childbirth are high.

Girls who give birth before the age of 15 are five times more likely to die in childbirth than girls in their 20s. When girls survive childbirth, they are at an increased risk of pregnancy related complications and injuries such as obstetric fistula: 65% of all cases of fistula occur in girls under the age of 15.

'There is a perception that somehow marriage protects girls. But that is not the case, it simply means that child brides fall off our radar and that the sexual, emotional and physical burdens they face are ignored' said Lakshmi Sundaram, Global Coordinator of 'Girls Not Brides'. A new study by Professor Anita Raj, San Diego School of Medicine, and Ulrike Boehmer, Boston University School of Public Health, demonstrates that a 10 percent reduction in girl child marriage could be associated with at least 70% reduction in a country's maternal mortality rate.' This study had compared maternal and child health indicators with girl child marriage rates for 97 nations in which relevant data was available.

Kate Gilmore from UNFPA further added that 'Our willingness to turn a blind eye to sexual violence in family' is another long-ignored issue.

Dr Kaosar Afsana, Director of Health, Nutrition and Population at BRAC in Bangladesh said: 'Bangladesh is doing well on most of The MDG indicators. Women are the change-makers in the community. Women's education, employment and realization of other rights have led to these positive outcomes.' She gave another example of progress made by Bangladesh in reducing diarrhoea-related mortality among children under five. Women went from village to village to every household imparting skill to women to give oral rehydration salts (ORS) and zinc to children with diarrhoea. Maternal mortality rates are coming down but not fast enough!

As was said in the first plenary at Women Deliver 2013, "Education is a primary vehicle for bolstering girls' agency", no doubt all countries must scale up measures to ensure all girls are able to access education with equity and dignity. Apart from education, healthcare, security, sexual and reproductive health services, protection from traditions (such as child marriages), employment opportunities, equal wages, among other measures that will ensure a rightful life of dignity for every girl and woman, must be provided without delay.

There is enough data to say that investing in girls and women is good for a country's economy. It is a smart investment and hope governments will make a smart decision too when it comes to resource allocation.