Has “All Die Be Die” Become A Gargantuan Hoax?!!! 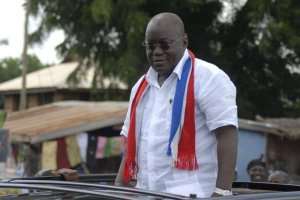 The mantra of 'all die be die' was a clarion call to all NPP followers not to allow themselves to be intimidated by any group of people before, during and after the December 2012 general elections. That call, obviously, was not made in a vacuum but rather following numerous acts of mindless violence by a section of our Ghanaian society, particularly from the NDC stock, on innocent and law-abiding members of Ghanaian society. In the eyes of the Ghanaian public and by the character of members of NDC, it has become well-established that this political entity called NDC, has very high propensity for violence.

This well-established public opinion is further made much more deadly by way of our nation's security services often turning a blind eye to acts of mindless violence being perpetrated by the followers of NDC; and cases in point actually abounds.

Now, Newton's third law of motion states that 'to every action; there is an equal and opposite reaction'. Again, it is a well-established fact that nature abhors vacuum so wherever a space is created by nature, nature always finds a way to seal it up. And even in our day to day lives, though we have a national security apparatus whose duty it is to ensure the safety of every single Ghanaian and integrity of our national borders.

We spend great percentage of our nation's resources to equip these state security apparatus to make sure they are always ready to perform their assigned duties of ensuring our safety as a people. Inspite of all this, we as individuals, never forget to close our doors when sleeping at night or leave home without making sure our properties have been left in safe hands of either private security people we have hired or close family associates.

We do these things because it is a well-known fact that we have something called 'response time'. This simply refers to length of time within which a call to a police, fire or ambulance emergency number is responded to. This response time is something that I can say exists only in these advanced and well-organized societies. When I was in Britain in the mid-90s, the response time of the emergency services was around 10minute which has recently been reduced to 7minutes.

But whatever it is, British people have a system in-place which clearly gives them a very high sense of security. Again, United Kingdom has more close-circuit-cameras(CCTV) per population than any nation on earth.So,you commit a crime with the intension of getting away with it but in the next few minutes, pictures of you, in the act, will be out in the public domain and you will be swiftly smoked out and dealt with.

The response time in America, to the best of my knowledge, has always been under 10minutes and this was recently demonstrated in Cleveland-Ohio, when Amanda Berry, who was kidnapped at the age of 16yars and held against her will in a house for ten solid years by a 65year old Cuban immigrant, Ariel Castro, who ended up having a baby with her.

The whole drama came to a halt two weeks ago, when the neighbor of this Cuban immigrant, Charles Ramsey, helped rescue the girl and in an interview with CNN's Anderson cooper on his flagship late-night live programme, 'Anderson Cooper 360', the instant hero Charles Ramsey actually made it known that it took the police just a couple of minutes to respond to their 911 emergency call. And even in a nation where they are protected by this highly efficient emergency service, they are constitutionally entitled to own guns at home for personal protection.

Now, coming back home to Ghana, a research conducted by Ghana National Fire Service, sometime in 2007,actually revealed that over 40% of fire hydrants in the Tema metropolis has been covered by huge private mansions and other business structures.Now,even Tema,which according to what city planners tell us, is the most well-laid out metropolis in Ghana has been infested with this level of utter madness, then one can imagine what prevails in excessively chaotic enclaves in Accra,Kumasi,Tamale and other major towns in Ghana.

Now, when you have a system that is totally incapable of delivering vital services to its people, coupled with a police service that is glaringly politicized to the point where a crime by the followers of a governing political party is seen as the height of civility while a commensurate response by a supporter of opposition party is seen as the height of abomination, then the principle of 'all die be die' which basically means taking legitimate step to protect one's life and property, cannot be wished away.

This principle of 'all die be die' therefore has absolutely nothing to do with either lawlessness or naked impunity but rather an act of making sure unmitigated law breakers don't take undue advantage of you with the intension of dispossessing you of your hard-earned personal effects. Now, a hard-earned personal effect is not always material wealth but also a reputation; and this is the crux of my article.

In the run up to 2008 general elections, NDC, then led by late Atta-Mills, made the person of Nana Addo their sole campaign message. Every wrong-doing one can ever think of, was heaped on Nana Addo by the foul-mouthed NDC juvenile delinquents and adult vagabonds.

Not long ago, a ducted video tape of Nana Addo at GBC make-up studio was uploaded onto You-Tube and James Agyenim-Boateng and Omane-Boamah, both deputy ministers of state at the time, actually went into the studio of Peace-FM, and on the 'kokrokoo' morning programme, announced the link to the tape on the internet for people to access. They even came up with statistics on how many people were watching the tape on the internet every minute. This act of abject recklessness was perpetrated by individuals who were being paid by the taxpayer to render public service to the state and its people.

In recent times, the battle of weird photos of public officials has been making rounds on the internet, particularly social media-Facebook. These pictures have portrayed personalities from across all political devide.And just a little over a week ago; a ducted photo of Nana Addo in a compromised pose with Ursula Owusu was widely circulated on Facebook.

Now, Nana Addo also has people who equally adore him and therefore would not sit aloof for his image to be denigrated. So, these individuals possibly took it upon themselves to also dish out a commensurate response to obvious originators of the said photo by simply replacing the heads of Nana Addo and Ursula with others; and immediately, the likes of Nana Ato Dadzie and his chronic hypocrite NDC people started calling for the arrest and prosecution of culprits.

And true to rumours making rounds at the time, we woke up on the morning of Monday, 27th May 2013 to the news that Mr. Omare-Wadie, a one-time chairman and prospective parliamentary candidate for the NPP in Ayawaso West-Wuogon constituency in the Greater Accra Region had been picked up by BNI. And I'm wondering whether the law by which Omare-Wadie was arrested was promulgated just that morning and therefore cannot have a retrospective effect to deal with actual originators of the said photo Omare-Wadie is said to have allegedly uploaded onto Facebook.

When Tsatsu Tsikata was convicted by a court of competent jurisdiction and appropriately jailed, NDC ,under the guise of "Free Tsatsu Movement", demonized the judiciary and verbally abused Kufuor to the point where he(Tsatau) had to be freed just after a couple of weeks behind bars. During the National Reconciliation Commission sittings, NDC people freely insulted every single commissioner over even their facial expressions during horrific testimonies by witnesses. But today, Justice Atuguba, with all his well-known NDC ties, is comfortably sitting as the president of panel of Supreme Court judges in the on-going NPP case and brazenly displaying his biases.

In 2008,when there was so much heat in Dagbon over the death of Ya Naa,the NDC,under the guise of now comatose Kwesi Pratt-led CJA,went ahead to embark on a demonstration in that volatile area even when the police administration had secured a court injunction against them. But today, a constitutionally guaranteed right of demonstration by Ghanaians has been curtailed by the current NDC government. Now, in view of the afore-mentioned scenarios, will I be right to say NPP's mantra of "ALL DIE BE DIE" has turned out to be a gargantuan HOAX?!!!