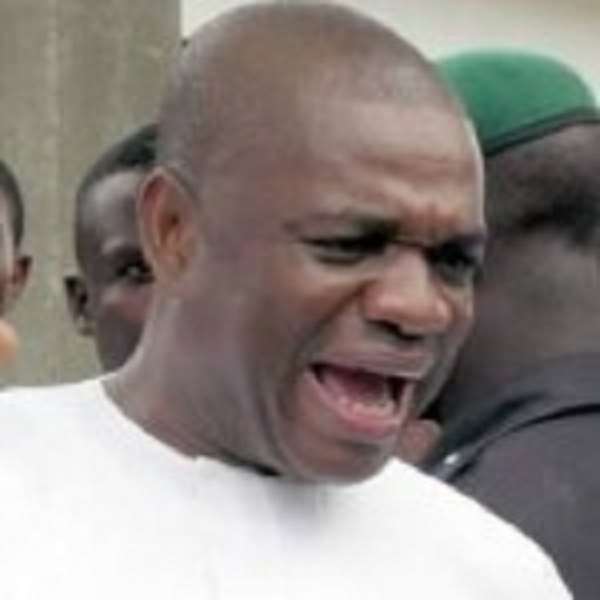 It has become obvious that the Abia State Government House, Umuahia, is no longer conducive to Governor T.A Orji, as he is supposedly bent on spending more time abroad than at home.

So-they-said, he just returned from a weeklong trip from Canada that his kowtowing aides dubbed economic trip and aswell described it as 'a huge success'. Whatever this means!

The 'huge success' Orji could not give to Abia people in the cause of governance is what he has always enjoyed abroad where government knew the through meaning of governance and has made sure that success always comes to play, while the governor was mouthing that his trip was investor-friendly.

Addressing Abians who thronged the Umuahia Government House Banquet Hall, shortly after his return, he said he had discussed areas of interest with the interested investors. Always making cymbal out of any journey he made to overseas, Orji would rent his cronies and friends to throng the Government House, Umuahia, to celebrate his return. Hooey!

This is typical when he nearly not returned from overseas last year after weeks it was said that he visited his daughter who put to bed. Orji took last year and celebrated himself as a governor in the

Diasporas and was making blast out of nothing, in guise that he was having town hall meeting with Abia people in precisely, the USA.

The same last year, he was travelling like school children on excursion to Abuja and Lagos, luring and lobbying Abia people in those states to believe his speechifying that works were going on in Abia

State, when such speech-makings were only but ruse.

Gov. Orji's freshly trip to Canada will not make a difference from other ineffectual trips he had made and told the world that very soon Abia State would be flooded by investors. The saddening part of the whole nuisance is that his government functionaries who always enjoy the trips with him will not call him to order that Abia people are asking questions about the much touted Monorail and Waste management projects that his government spent the Abia people's hard earned money in the media advertising elusive projects that only existed in the minds of the Orjis than those projects could possibly be drawn on ground in Abia State. But at his back, you hear those government functionaries bemoaning their unhappiness with the 'Emperor of Abia State'.

Do we still remember the German company which only came for presentation on the waste management project in the state and the government advertised the visit in the media as if it had a contract signed with the German company? The same thing is about to happen as it was in the news that Orji had instructed some of his aides to make sure that the apparently Canadian investors visit the state soon.

It can be construed that the Government of Abia State-led by Orji is doing everything within its reach to launder its decrepit representation. If not, how could the same government which last year amplified how it gave and shared (N10B?) to farmers be talking about imploring the services of a Canadian company in the area of agriculture?

We are not even talking about environmental control in the state that many billions of naira have been spent on contracting the services of indigenous contractors, yet Abia State is changing from bad to worst in waste management.

The issue of oil and gas in Abia State is a story for another day. Can anyone imagine that Governor Orji was quoted as saying that his 'business' trip to the Canada would strengthen the two-pronged

relationship between Nigeria and Canada, as if he is the president of Nigeria. No doubt, Orji lacks the perimeter of governance!

The trip can never be in the overall interest of Abia State as he wanted us to believe, when Orji could not utilise the resources already in the state. He expected that the people-oriented programmes

that Abia people have always been tasty of under his government can only see the light of the day when foreign investors come and manage our affairs. Where is the EFCC?

Does somebody smell something like misappropriation of Abia people's fund on foreign trips and the contracting of foreign investors? Was it not the same Canada that the governor said that would be building monorail in Abia State? Where is the Monorail?

Why is it that anytime Governor Orji returned from any trip overseas, he calls for celebration? When he has nothing to show in Abia State in term of dividends of democracy and when Abia people in the state also wear baked tears with only repose on fate to give them a better governor in the future who would polish the state from the ruins it has come to suffer under Governor Orji.

It should not surprise us by tommorrow if we read from Governor Orji's ingratiating aides that this writer is not certified to judge their public servant; if they will not even call Yours Truly names and

fabricate stories against him because they are experts in such, and tell the world how their bible said that the masses should pray for their leaders, even in the face of tyranny.

It is annoying that Governor Orji always run to overseas to contract companies there to come and help develop Abia State, even when he has refused to yield to the purportedly call by the Akwa Ibom State Government to enter into an agreement with it, so that Akwa Ibom would extend its networks of good road projects to Abia State, since Orji has an inadequate approach to good governance.

Aside fighting officials fighting corruption, tell me what A...
7 hours ago