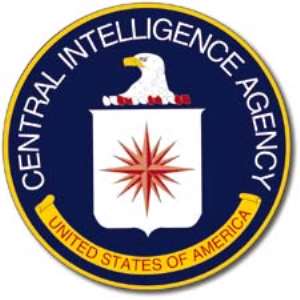 The Real Story on why Reagan administration wanted ‘spies’ out First PNDC Chief of Staff among eight exchanged GYE NYAME CONCORD has learned that the Reagan administration agreed to swap the eight Ghanaians it acknowledged as agents of the Central Intelligence Agency (CIA) for the debonair Ghanaian spy, Mr. Michael Agbotui Soussoudis, following fears that the lives of the eight had been endangered by the exposure of their identities. Sources say the Americans agreed to swap Soussoudis for their reported agents at the time because the US administration considered the Provisional National Defence Council (PNDC) military regime as radicals and overzealous revolutionaries who would not stop short of eliminating all those identified as their contacts on the database downloaded from the CIA station office in Accra and handed over to the regime by Ms Susan Scranage. Ms Scranage was secretary to the CIA chief in Accra at the time and had been seduced by Mr Soussoudis, cousin of the Chairman of the PNDC, Flt. Lt. Jerry John Rawlings, and agent of then national security capo, Captain (Rtd) Kojo Tsikata. Soussoudis, 39 at the time, had wormed his way into the heart of Ms Scranage, described as a “shy, naive, country girl who had never before been overseas” in limited CIA documents accessed by this paper last week. Widely publicized information in the US at the time of the event in 1985 indicates that Ms Scranage passed to Soussoudis damaging amounts of classified information, including the identities of CIA agents in Ghana. Among those swapped for Soussoudis were Naval Capt Oppong, first Chief of Staff of the PNDC regime, who was working at the office of the then Chairman Rawlings and one Colonel Bray, a military officer whose brother was a Deputy Director of the Ghana Education Service. Colonel Bray is a former student of Prempeh College in the Ashanti Region, Kumasi. Mr Abel Edusei, presently CEO of the state-run Ghana National Procurement Agency (GNPA), Mr Adu Gyamfi, a former Managing Director of the one-time national conglomerate, the Ghana National Trading Corporation (GNTC), who had been posted to head the Achimota Brewery Company (ABC) at the time, and Major John Kwaku Awuakye, Deputy Director (Organisation and Plans) at the Ministry of Defence and one-time Acting Commanding Officer of the Base Ordnance Depot were also among the eight fingered by the database.

Concord could not confirm by press time whether Mr Felix K Peasah, security investigator of the US Embassy in Accra at the time who was sentenced to life imprisonment by a Public Tribunal after he reportedly pleaded guilty with explanation to charges of spying preferred against him was among those exchanged for Soussoudis.

Peasah, who had a 22-year service with Ghana’s national security at the time, was alleged to have agreed with the Mr L. O. Shaughnessy, the CIA chief at the US Embassy to recruit someone who could feed the Embassy with classified information and subsequently recruiting one Theodore Atiedu, who was working with the national security apparatus.

The PNDC is believed to have used the database to its security advantage. Captain Tsikata, the Marxist-oriented Ghanaian security capo at the time, is believed to have also shared his take on the suspected CIA agents with Cuba, Libya and the Soviet Union, whilst holding that of the KGB agents. The fingering of those who were swapped however came after Soussoudis was later arrested for espionage-related charges in the US following the events in Accra. “On a brief return to the US, Scranage failed her poly and, when pressed, confessed all. She later cooperated with the FBI in entrapping Soussoudis, a US resident. Scranage pled guilty to one count of espionage and two counts of violating the Intelligence Identities Protection Act, and was sentenced to five years, later reduced to two. Soussoudis was charged with espionage, pled nolo, was sentenced to 20 years, then quickly traded for imprisoned CIA agents in Ghana” noted Frederick Wettering Cheers, an acclaimed American Intelligence expert writing on the issue. In a bid to save its alleged agents, the Reagan administration through its Ambassador at the time, Mr Frist Fischer, got in touch with the former Speaker of Parliament and a key civilian figure in the PNDC regime then, Mr. Justice Daniel Francis Annan to open negotiations on the issue. The Embassy then presented a list of alleged agents it wanted out, which was presented to the PNDC administration by the Ambassador. It was later withdrawn, sources say, and replaced by another list prepared from Washington for the Embassy. But before then, the Ghanaian Intel chief had copied details of the first list before handing them back to the Americans. Following the successful negotiations between the two countries, Soussoudis was eventually released on November 25, 1985 whilst the eight were allowed to emplane to the US, where almost all of them were resettled in the Washington DC, Maryland Virginia metro area. Interestingly, the Sharon Scranage case is often cited by pro-polygraph (lie detector tests) security experts as an example of how the polygraph can be effective. ... And Ahwoi Writes To NRC MR KWAMENA AHWOI, one time Chairman of the Citizen’s Vetting Committee, who stands accused of being part of a denationalisation plot by the PNDC by one of eight Ghanaians swapped for Mr Michael Soussoudis, has written to the NRC to declare his intent to appear before it to answer allegations leveled against him by Major (Rtd) John Kwaku Awuakye. This paper gathered that Ahwoi’s letter was dispatched to the NRC last Thursday, a day after he granted this reporter an interview stating his intent to expose what he believed was his accuser’s false evidence at the Commission. His accuser, Major John Awuakye, a former Ordinance officer of the Base Ordinance Depot of the Ghana Armed Forces has alleged that he was falsely declared a CIA agent, denationalised and unlawfully sent to the US with his family. He is praying the NRC to compensate him because his deportation to the US caused him undue hardship.