No Catch At Aboakyir Festival In Winneba 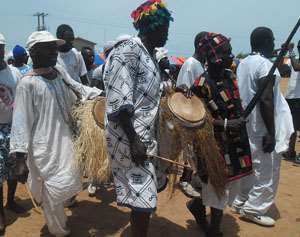 This year's Aboakyir festival celebrated by the chiefs and people of the Effutu (Winneba) in the Central Region ended in disappointment over the weekend as the two Asafo companies failed to produce a catch to climax the celebration.

The two Asafo companies, Tuafo Number One and Dentsefo Number Two hunt for a live deer in a competition in which the first to catch the deer is  declared the winner and the deer is later used to perform rituals.

However, this year's festival did not go the way people had wanted as all the Asafo companies came from the hunting grounds empty handed around 1:30pm to the durbar grounds; an indication that there would be a lot of hardship in the country. At about 11:10am the Tuafo Number One Asafo Company came to announce their failure to make a catch, followed by the Dentsifo Number Two later with the same story.

When the news got to the people they started leaving the grounds unceremoniously because the Central Regional Minister, Samuel Sarpong who was attending the festival for the first time, had delivered his speech.

Information available to DAILY GUIDE  has it that any catch made by any of the Asafo companies has a meaning, whether fishermen would catch more fish in the year or farmers would produce more.

The police had wanted to place an injunction on the festival after rushing to the Agona Swedru for the order.

They later withdrew the injunction, allowing the festival to be celebrated.

The Aboakyir festival, for the past five years, has been greeted with controversies including political intrusions and chieftaincy crisis.

Information reaching DAILY GUIDE indicated that the Central Regional Security Council had a very tough time this year trying to intervene to ensure total peace and stability, months before the celebration.

In attendance at the meeting were the Central Regional Minister, Samuel Sarpong and his Deputy, Queenstar Pokuaa Sawyer, the Effutu Municipal Chief Executive, the Regional Police Commander, DCOP Ninson as well as the two Asafo companies and Otuano Royal House.

It was resolved that the stepping on the deer caught by the Asafo companies would not be performed at the 2013 Aboakyir festival.

Mr Sarpong called on the people to eschew conflicts that have exaggerated the festival adding that the festival has the potential of improving the economic activities of the people in the area.

He called for total unity among the factions to ensure total development in the area.

Political interferences have taken away the beauty of the festival for the past five years. For instance, a former Member of Parliament (MP) for the area was alleged to have promised in his campaign message that he would ensure the destoolment of the paramount chief of the area when given the nod.

The statement nearly caused mayhem about three years ago during the celebration of the festival; a situation which called for the cancellation of the festival to save lives and properties since the people were expecting the MP to fulfil his promise.