Day 9 At The Supreme Court: Is Mr Tsatsu Tsikata The 'Messiah' Or Should The NDC Wait For Another? 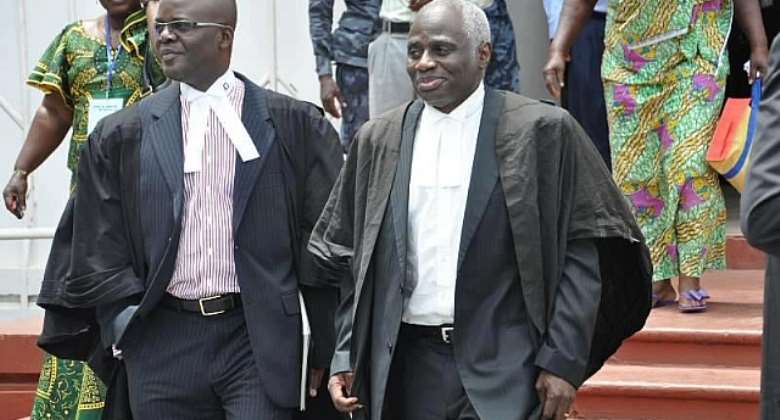 I have keenly been following the case as every other Ghanaian is doing but have resisted the urge to write about it until the very end. I have held on to my pen (nay, keyboard) until now but I couldn't resist the temptation any longer! My resolve has been broken by the goings-on at the Supreme Court.

Readers may recall that before the hearing of the substantive case, there were various indications from the respondents and some media commentators that the petitioners had no case.

The respondents and their surrogates vehemently protested that Nana Addo Dankwa Akufo-Addo, Dr Bawumia and Jake Obetsebi-Lamptey were only just bad losers who could not come to terms with the declaration of John Mahama as winner of the December polls.

However, Dr Bawumia's surgical precision at unravelling the monstrous irregularities, omissions and commissions by the EC in the December elections have made people sit up and take notice that indeed, there were some damnable evidence against Dr Afari-Djan and his puppet masters!

However, instead of 'punching holes' (apologies to Nana Ato Dadzie) in the evidence of the petitioners, the lawyers of the respondents ended up accepting variously that the elections were wrought with errors! Tony Lithur, counsel for President Mahama in his cross-examination of Dr Bawumia admitted to certain 'administrative errors' by the E.C whereas James Quarshie-Idun also justified the irregularities whilst suggesting that they were but transpositional and clerical!

Unsurprisingly though, the 2 counsels jointly sought to downplay the impact the so-called 'administrative errors' had on the elections. Perhaps the 2 learned men forgot that our country Ghana is fighting to retrieve our monies from Mr Alfred Woyome who was paid over 51 million GH Cedis due to same canker that both referred to as 'administrative and clerical errors'.

These same 'administrative errors' cause the award of contracts to cronies which in turn result in shoddy works and the payment of dubious judgement debts. Everywhere in the world, corruption thrives on the prevalence of 'administrative errors' and therefore, it must not be wished away if it has led to erroneous declaration of John Mahama as winner of a national election. This has been the bane of our beloved country.

Though the 2 counsels admitted to 'administrative errors' in the declaration by Dr Kwadwo Afari-Djan, yet they bleated on to the Supreme Court to disregard the petitioners case! In the face of the avalanche of evidence petitioners have presented, the NDC still filled their supporters with supreme confidence that they had in their corner a legal luminary, a legal guru and legal authority in Mr Tsatsu Tsikata who was going to smash the petitioners' evidence into smithereens! So Ghanaians waited with baited breath for Tsatsu to start his much-awaited cross-examination Dr Bawumia.

So cometh the hour! Cometh the saviour! Or did the saviour not turn up after all? The NDCs dragon Tsatsu Tsikata has certainly has entered the fray and Thursday, 2nd of May was day 9 in court and his 3rd day of cross-examination.

Needlessly though it is to say that up to the 6th day, both Tony Lithur and James Quarshie-Idun were cacophonous but the NDC's wizard of an ex-convict lawyer Tsatsu Tsikata, have sounded more like an old broken gramophone record since he took over the task of cross-examining Dr Bawumia.

He has been slow, monosyllabic and has spectacularly failed to set the court alight! Mr Tsatsu Tsikata has been needlessly repetitive and depressingly uninspiring! The Supreme Court and Ghanaians are still awaiting the arrival of the saviour the NDC have touted and hyped so much.

Tony Lithur and Quarshie-Idun's admission of 'administrative errors' in Dr Kwadwo Afari-Djan's declaration of John Mahama as the winner in the December elections and Tsatsu Tsikata's flat performance so far have crystallised the case of the petitioners.

Nana Akufo-Addo, Dr. Mahamudu Bawumia and Jake Obetsebi-Lamptey of the New Patriotic Party quest to have the Supreme Court invalidate Dr Afari-Djan's declaration of John Dramani Mahama winner of the December 7th Presidential election seems to have gained much more impetus after 9 days of insipid cross-examination of the petitioners' star witness.

It is obvious that, indeed, the petitioners have put together a non-porous case against the Electoral Commission. Nana Addo Dankwa Akufo-Addo, Dr Mahamadu Bawumia and Jake Otanka Obetsebi-Lamptey have backed-up their rhetoric with mountainous evidence of pink sheets: the primary records of the election at the various Polling stations detailing out a litany of irregularities.

Tsatsu Tsikata's acquiescence to the prognosis of Tony Lithur and James Quarshie-Idun of what might have gone wrong in the Electoral Commission's collation of results and declaration of John Mahama the winner of the December's general elections makes mockery of their defence.

The Supreme Court must not overlook this blatant admission by the EC and NDC and surely, it should not let that go unpunished. In respect to voting without biometric verification, the counsels for the 2 respondents have tripped over each other in an attempt to convince the Supreme Court to disregard its significance in the outcome of the elections whilst in equal measure, trying to find convenient excuses to suggest that there was no incident of voting without biometric verification.

Tsatsu however explained that those individuals who had voted without being biometrically tested have done so because they were physically disabled with no fingers! How preposterous! Such an incongruous and disjointed defence! It is interesting how the counsels of the Electoral Commission now concedes to 'administrative errors' when Dr Afari-Djan had bullishly dared the opposition to go to court!

Be that as it may, I guess Ghanaians in general and the NDC in particular have really been disappointed with Mr Tsatsu Tsikata's performance. The NDCs acclaimed best legal brain who was to put Dr Bawumia in his place has been unimpressive. He has failed to dazzle and been flat in his cross-examination of the petitioners' star witness.

Tsatsu's drab performance has made him look rather like a student of James Quarshie-Idun and Tone Lithur. Indeed, it is rather Dr Bawumia who has ended up puncturing Tsatsu's over-bloated ego and brought down the latter's eccentric parachute. His over-bloated ego has been deflated by the Petitioners' star witness who is even not a lawyer.

On the back of Tsatsu's dreadful delivery so far, I dare ask: Is he the messiah the NDC are waiting for or should they look forward to the coming of another? Reality check!