Why The Unqualified Cuban Doctors Will Kill The Ghanaian People 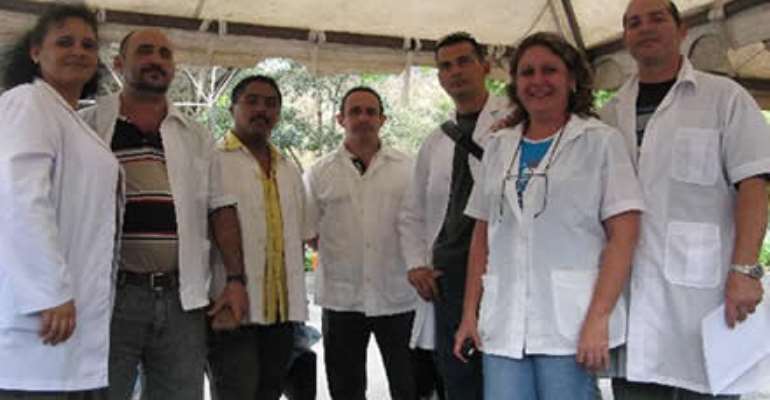 Dr. Nancy Magarita Gonzalez Rodriguez goes over an x-ray with her students at the Latin American School of Medical Sciences in Havana, Cuba. Students who graduate from the Caribbean and try to practise in Brazil have overwhelmingly failed a medical exam there, according to Brazil's Ministry of Education.

Once renowned, Cuban Doctors fail their medical Exams
Many people still believe that Cuban health care is among the most efficient in the world, as it is often advertised by the regime, but the same doctors who support the supposed renowned health care system on the Caribbean island, however, are struggling to re-validate their diploma to practise legally in Brazil.

At the most recent re-validation test, which includes proficiency in Portuguese, their medical knowledge and clinical practises, none of the doctors who graduated from Cuba were approved. From 2005 to the present day the most recent exam administered more than 300 Cuban doctors have applied, but only 25 doctors were authorised officially to work in Brazil, according to the Ministry of Education.

Their results, in fact, ARE AMONG THE WORST of the average of 600 professionals, ranging in homelands from Argentina, Bolivia, the United States and European counties who go through the process.

The Brazilian Medical Association attributes the apparent failure of so many doctors in the test to the lack of quality of universities in countries like Cuba and Bolivia. According to the association, the teaching of medicine in these places are at the level of a nursing major in Brazil.

In the United States, the situation is similar. According to the Association of American Physicians and Surgeons, more than 75 percent of those with Cuban medical degrees fail in the exam of the Educational Commission for Foreign Medical Graduates for licensing in the U.S.

Most of them also fail to receive certification as 'physician assistants'.

For Humberto Fontova, a Cuban refugee and political commentator in the U.S., the results are not a surprise. 'The Cuban health students don't learn what most medical students in most countries learn in most medical schools,' Fontova said.

Since former president, Luiz InÃƒ¡cio Lula Silva, took office in 2003 the government tried to facilitate the use of the work from Cuban doctors in Brazil. A proposal of automatic authorisation for all doctors from the island to work in Brazil was approved in the House of Representatives, but later reproved by the Senate.

Despite that, many Cuban doctors are being encouraged by both governments to come to Brazil's poorest areas. One of the reasons is the Brazilian government's program for 'The Health of the Family,' which is focused on preventive care a speciality of the Cuban health system.

*** Meanwhile, Governor Ricardo Montinho ParaÃƒ­ba, a northern state and one of the poorest in the nation, went to Cuba in September to hire doctors. But according to ParaÃƒ­ba Council of Physicians, just one Cuban was approved to be a doctor in the state. Montinho later gave up on the idea. 'I just wanted to improve the services of my state,' said Montinho.

*** In the very distant centre-western state of Tocantins more than 500 Cuban doctors were hired illegally to work for 'The Health of the Family.' A state court decided to ban the work of these professionals.

The medical associations in Brazil deny that doctors don't want to work in poor and distant areas. They also say that there is no way to adopt a different procedure and doctors working illegally would be prosecuted. 'We just need a good career plan for the doctors to go into the interior. We can't open exceptions for specific countries and have to ask for a test like other countries do with us.

Argentina and U.S. have good universities and their students are approved here,' said Dr. Fernando Matos, president of Rio Grande do Sul's Council of Physicians, who worries about the work of Uruguayans doctors in his state border.

*** The test, however, has been criticised by Brazilians who study in other countries. At a private institution, they pay over $1,500 a month for tuition, while in Cuba it's no more than $200. In Cuba, moreover, applicants just need approval from the Workers Party, the Brazilian Communist Party or other institutions aligned with Castro's regime. 'The test is really to reprove everybody', has said Afonso MagalhÃƒ£es, president of the Association of Brazilian Students of Medicine in Cuba.

Ghanaian people must be very careful about those bogus Cuban quack Doctors in Ghana. Most of them are not really qualified as Doctors.