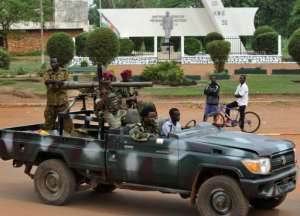 N'DJAMENA (AFP) - Regional leaders went into summit talks hosted Thursday by Chad to discuss ways to end the crisis in the Central African Republic, where violence has been endemic since rebels seized power last month.

"The principal question to be dealt with during the course of this summit is that of security in the Central African Republic (CAR)," Chad's President Idriss Deby said after proceedings opened.

"The CAR is like a wound in the heart of central Africa. We have to mobilise to put an end to this recurrent situation," Deby told fellow leaders in the Economic Community of Central African States (ECCAS).

"Armed bands loot, hold to ransom and racketeer the population," he added, stating that the Seleka rebel alliance which ousted president Francois Bozize "is an organisation that lacks unity and the initiative of a command (structure)".

Deby also pointed that an international ECCAS military force deployed in the Central African Republic, the 500-strong FOMAC, was "insufficient to do the job".

The ECCAS leaders were joined by President Jacob Zuma of South Africa, which had troops in the troubled country aiding Bozize. At least 13 of these men were killed and 27 wounded in a clash with rebels on March 23 as Seleka fighters neared the capital Bangui.

The summiteers should "draw up an assessment of the evolution of the situation in Central Africa" since decisions taken by a previous ECCAS summit on April 3, according to a Chadian diplomatic source.

The source said the earlier summit had made it possible to find "institutional means" to legitimise the seizure of power by Seleka leader Michel Djotodia, who swiftly proclaimed himself head of state.

Djotodia was last Saturday elected interim president by a national transitional council of 105 members, which is acting as a constituent assembly in line with regional demands. The Seleka chief must rule for no more than 18 months.

While these developments have clarified the political situation, the overall state of one of the world's poorest countries has deteriorated since the last ECCAS summit.

Looting has been ceaseless and clashes have taken place between Seleka forces and residents angry at the lack of security, while militias who supported the Bozize regime remain active. About 20 people were killed in weekend violence. A diplomatic source even expressed fear of "a civil war" if the unrest persists.

On Tuesday, Djotodia announced police reinforcements of 500 men, with 500 others to the paramilitary gendarmerie police. He also pledged to put Seleka fighters in camps and to clear them off the streets. However, the latter step did not take place and the interim government asked the FOMAC nations to send reinforcements of 1,000 men to provide security.

Prime Minister Nicolas Tiangaye, who formerly led the political opposition, also asked for reinforcements of French troops to help pacify the capital and the blighted interior of the country, which is potentially wealthy with its reserves of diamonds and gold.

The ECCAS summit is due to discuss these issues, leading to scepticism from some observers as to which nations have the trained manpower and resources to maintain peacekeeping forces. One diplomat said the region was "fed up with always having to help the same country".