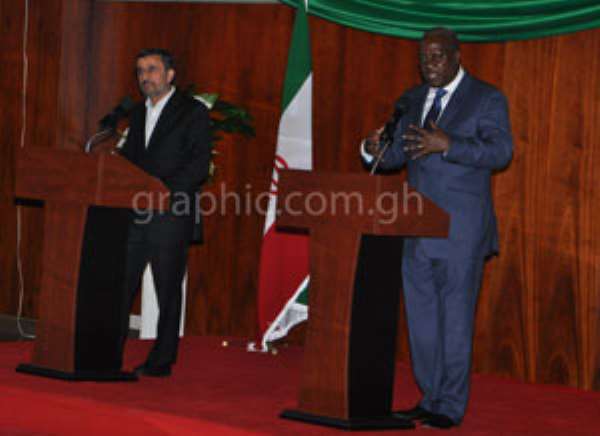 Ghana and Iran Wednesday signed memoranda of understanding (MoUs) on bilateral cooperation in the areas of education, agriculture, tourism, youth and sports.

The signing of the MoUs followed a series of bilateral discussions held between Ghanaian and Iranian officials, led by President John Dramani Mahama and his Iranian counterpart, Mahmoud Ahmadinejad.

The ministers in charge of Education, Agriculture, Tourism and Youth and Sports in Ghana and Iran signed the MoUs at a ceremony witnessed by Presidents Mahama and Ahmadinejad at the Flagstaff House, Kanda in Accra, Wednesday.

In his remarks after the signing ceremony, President Mahama said the memoranda on the four areas would promote trade and cultural relations between Ghana and Iran.

He said apart from the four areas of bilateral cooperation, there should be the exchange of expertise in the areas of agriculture, petroleum exploration and science.

The President called for the establishment of joint companies by Ghanaian and Iranian business people.

He said Iran gave ample expression of its solidarity when it sent two separate high-powered delegations to attend his swearing-in ceremony as President and the funeral of the late President John Evans Atta Mills.

President Mahama commended Iran for deciding to transform the Iran Clinic at the Kwame Nkrumah Circle into a polyclinic.

In the field of education, he said the Islamic University College in Accra had been a symbol of friendship between Ghana and Iran.

Answering a question on the implications of President Ahmadinejad's visit to Ghana, President Mahama said Ghana and Iran had maintained relations for a long time and had also been members of the Non-Aligned Movement (NAM) for an equally long period.

Additionally, he said, the two countries had maintained missions in their respective nations for years.

President Mahama said the relations between the two countries had always created opportunities for the leaders to dialogue on issues of international interest.

He said he believed that the issues that confronted the world should be discussed by nations and stressed the need for dialogue to promote mutual understanding among nations.

President Mahama expressed his condolence and sympathy to President Ahmadinejad and the people of Iran in respect of the earthquake that struck Iran.

For his part, President Ahmadinejad said Ghana and Iran were bonded together in the spirit of seeking justice and independence in the world.

He said the two countries were determined to expand cooperation in all fields and pledged the readiness of his country to transfer its expertise to Ghana.

He said Ghana, which had been at the forefront of the anti-colonial struggle, deserved respect and tribute.

President Ahmadinejad, who is the current Chairman of the NAM, said in order to have a world full of justice and friendship, "we need to establish a just order".

That framework of a just order, he said, was contained in the manifesto of the NAM.

He expressed the hope that Ghana and Iran would work together to revive and restructure the NAM to lead the establishment of the just world.

Answering a question on Iran's supposed antagonism against the Western world, President Ahmadinejad said Iran had never had any war or intention of a war against the West.

He said Iran had never had a dictator or launched any military attack against the Western world.

Rather, he said, it was the Western world that had been trying to attack Iran and plunder its resources.

He claimed that the Western world had surrounded Iran with troops, a development which posed a threat to Iranians.

He said despite the sanctions imposed on Iran by the West, the country continued to make progress.

For instance, he said, before the imposition of sanctions on Iran, it was producing 32 million tonnes of cement a year, but now that had increased to 80 million tonnes a year.

Additionally, President Ahmadinejad said Iran had developed nuclear energy for peaceful purposes in the areas of agriculture and energy, while it had been able to launch a satellite into space.