Akufo-Addo: The lawyer behind a lawyer 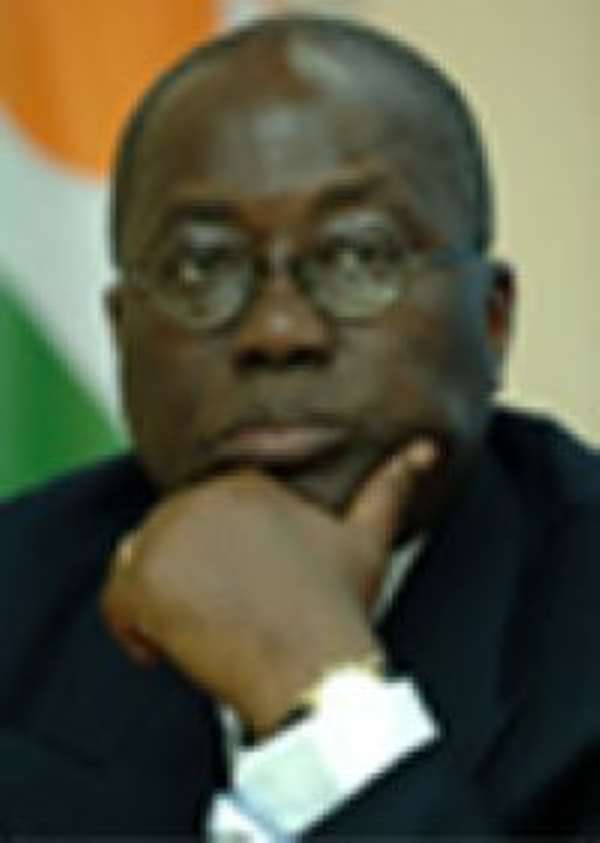 Having gone thus far in unpacking the implications of Justice Kpegah's suit against Akufo-Addo, we are at the point where we want to clarify issues to help those following us keenly understand more clearly what is at stake.

Some have misconstrued issues and thought that we were out to doom Akufo-Addo for whatever motives best known to us. I disagree strongly and urge them to see what we do as a public education effort. We are keenly pursuing this matter not because we are wicked, mischievous, tribalistic, or plain insensitive to the feelings of Akufo-Addo. Far from that.

For one thing, it must be stated that Akufo-Addo is well-accomplished, having served in various capacities and now fighting tooth-and-nail to be Ghana's President. Thus, this suit provides us the opportunity to do all we can to settle all doubts about his integrity. And we will continue to do so till the dust settles for us all to know him as he is and be comfortable knowing him. Probably, Kofi Coomson of the Ghanaian Chronicle will revise his notes after all is done.

We are pursuing the matter in the interest of public conscience and service to society and Akufo-Addo himself. That is why we have been picking the issues apart from several perspectives and discussing for all that they entail. We have also kept updating our findings and their implications as such.

Our interest in this matter has all along been motivated by two considerations:

1. To help find a closure to this spate of allegations against Akufo-Addo's professional stature by all manner of people. Indeed, these allegations detract from his Akufo-Addo integrity, which is invariably reflected in his political misfortunes. Thus, this instance provided by Justice Kpegah calls for a thorough inquiry to end it all. All others having to do with streaks of character (arrogance, drug abuse, etc.) or quirks of unfortunate circumstance can be dealt with at other levels for what they are.

2. To provide official documentary evidence to plug the missing link in Akufo-Addo's timeline (especially between 1967 when he completed Legon with a 3rd class in BSc. Econs and July 22, 1971, when he emerged as having been called to the English Bar). We emphasize this part because one of the major queries has been why Akufo-Addo hasn't stated on his CV the names of Oxford University and the law training institution that he graduated from to be called to the English Bar.

With these two considerations driving our inquiries, we have contacted several sources and gathered as much as we could.

We want to place it on record that our checks at various places confirmed the existence in official records of the name “William Addo Dankwa Akufo-Addo.” From the Lancing College in Sussex, UK, it was confirmed. So was it for the Honourable Society of the Middle Temple too, as you can see from the excerpt below:

So is it too with the NOTE signed for him by E. Bart-Plange Brew (Acting Administrative Assistant of the General Legal Council), dated Tuesday, October 16, 2007.

Certainly, the premise of Justice Kpegah's suit of impersonation against him is the name “William Addo Dankwa Akufo-Addo NO. 1190 on the roll of lawyers in Ghana,” which Justice Kpegah wanted Akufo-Addo to own up to. And he has done just that. What follows next will be known when the case begins being heard.

The General Legal Council NOTE has its own implications, especially because of the second paragraph in which Bart-Plange said that he had been informed of the loss of Akufo-Addo's qualifying and enrolment certificates. The NOTE didn't give any enrolment number but the document that Myjoyonline published to show that a “W.A.D. akufo Addo NO. 1190” was on the roll of lawyers, dated July 8, 1975.

So, if indeed Akufo-Addo had already been enrolled on July 8, 1975 by the very General Legal Council, wouldn't there be any evidence of that enrolment in the General Legal Council's records for Bart-Plange to quote in the NOTE that he signed for Akufo-Addo on Tuesday, October 16, 2007 (instead of compounding the credibility problem that he had been informed of the loss of those certificates)?

Or, which other institution issued the qualifying certificate but the General Legal Council itself? Or, who else but the Judicial Secretary would have issued the enrolment certificate to Akufo-Addo in 1975?

Some lawyers (Ace Ankomah, for example), have been quick to say that the fact that one cannot produce one's qualifying and enrolment certificates doesn't mean one is not a lawyer. Fair enough. But in Akufo-Addo's case when those two documents are substantial because of the discrepancy in his NAMES, won't these official documents be the best answer to all the nagging questions being raised?

We quote from paragraph 15 of Akufo-Addo's motion to reflect the concerns raised by those challenging him to prove that he duly complied with the regulations to be enrolled as such:

“That on returning to Ghana, I undertook the post-call law programme required of lawyers to the Ghana Bar on 8th July, 1975 as William Addo Dankwa Akufo-Addo…” and he referred to the NOTE signed by Bart-Plange as evidence of his certification (when that NOTE itself says that Akufo-Addo claimed to have lost his qualifying and enrolment certificates)!

The high public interest in the matter has generated some additional interpretations, which is why we are still analyzing the goings-on. A certificate from the General Legal Council dated July 8, 1975 would have authenticated Akufo-Addo's claim that on returning to Ghana, he undertook the post-call law programme required of lawyers to the Ghana Bar. Many eyebrows are still raised on this aspect.

But above all, it must be stated aboveboard here that Justice Kpegah has not sued Akufo-Addo because he is convinced that AKUFO-Addo is not a lawyer. Unfortunately, that's the position some people have taken, which Akufo-Addo himself stated in his response to the suit. In fact, he elaborately ridiculed Justice Kpegah on this score in paragraph 17 of his motion for the case to be struck out.

We haven't done anything beyond raising nagging questions to help plug what we saw as a missing link in Akufo-Addo's timeline. Those questions definitely rankled with his followers; but we have remained undaunted in our search for whatever will help us find a closure to the allegations.

But that doesn't neutralize the substance of Justice Kpegah's suit. If anything at all, it brings into a clearer focus the nitty-gritty of his suit.

What is not known is whether in replacing the “William” with “Nana” he went through the laid-down official process. Otherwise, merely claiming to be comfortable with Nana Addo Dankwa Akufo-Addo and not what he is known officially in all those documents will be problematic for him. That is where Justice Kpegah is pushing him, even though his additional claim of someone going by the name W.A.D./W.E.D. Akufo-Addo being murdered and buried in inexplicable circumstances for which he threatened to cause the coroner to exhume that body could be adding a different complexion to the matter.

If we go by the official name for Akufo-Addo, then, questions will arise on whether the one practising law in Ghana all these years going by the name Nana Addo Dankwa Akufo-Addo (not only nominally but officially in written form too) isn't impersonating (as Justice Kpegah has alleged in his suit).

The legal barb to hook Akufo-Addo stems from this issue. If, indeed, he has no official document to confirm the change of name, no matter what he says, it won't save him. The legal conundrum must be known to Akufo-Addo himself.

If you want me to tell you why Justice Kpegah has chosen this line of action, I will simply guess that he is aiming at proving that Akufo-Addo hasn't complied with the norms for practising law in Ghana, which impersonation entails in this sense.

Therefore, we consider it a bounden public duty to continue looking into this suit because we want the truth to be out so Akufo-Addo can free himself from all the persistent allegations of impropriety cropping up every now and then to keep him in the public sphere for the wrong cause. The discussion continues.