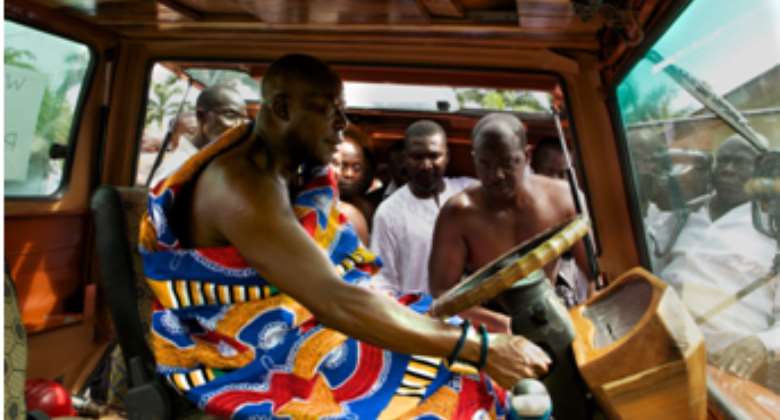 The Suame Magazine Industrial Development Organization (SMIDO) has formally unveiled a prototype car at a ceremony in Kumasi, in its quest to harness the engineering potential in vehicle manufacture at the light industrial area.

The model car named “SMATI Turtle 1” was built by the local artisans in partnership with a Netherlands based NGO, AARDSCHAP Foundation using simple tools from a cluster of engineering workshops at Suame Magazine.

The vehicle is set for shipment to Europe for an international exhibition to attract investors for large scale commercial production to serve the African market.

The Asantehene, Otumfuo Osei Tutu II, inaugurated the vehicle with a test start and a comfort feel of the SMATI Turtle at Manhyia Palace.

He commended SMIDO for showcasing the engineering ingenuity of Suame Magazine and called for a renewed national interest and support to develop artisanal enclave as a major national asset.

The bold attempt by SMIDO is to attract national and international recognition and support to put artisanal engineering at the forefront of the national quest for industrialization.

The doors of the SMATI Turtle can be opened from all the four corners of the vehicle and purposefully built for farming and police patrol purposes.

According to SMIDO Consultant, Nyaaba Aweeba-Azongo, the name of the vehicle was strategically chosen “to reflect the immediate need for national intervention to salvage the imminent collapse of the artisanal engineering industry in the country epitomized by Suame Magazine”.

The turtle is a robust reptile and an amphibian which symbolizes strength and the ability to withstand any terrain and particularly, the African terrain.

SMATI is the acronym for the Suame Magazine Automatics Technical Institute. The SMATI concept was formally launched in January, 2009 by President John Mahama, then Vice-President, as part of a campaign to garner support to establish a model institutional engineering training centre for the artisans of Suame Magazine and others in Ghana.

Mr. Aweeba-Azongo said the engineering institute when established would streamline the apprenticeship system through modern curricula and engineering upgrading by master craftsmen to reflect the current trend in the global automobile industry.

The SMATI Turtle 1 is thus to promote this engineering institute concept to demonstrate that given the requisite support by government, innovative engineering and technological products and services shall emerge from Suame Magazine to contribute to the socio-economic development of Ghana, he stated.

President of SMIDO, George Asamoah Amankwaa, said there is enough testimony to indicate the potential of Suame Magazine to create employment and lead in industrialization when given the requisite support.

The SMIDO-Dutch partnership which was launched in February 2013 also seeks to forge partnership between the Rietveld Academy of Amsterdam, the Kwame Nkrumah University of Science and Technology (KNUST) and SMIDO for exchange programmes.

CHRAJ investigating 428 public office holders for failing to...
10 minutes ago

Injured persons in Ejura shooting yet to receive compensatio...
10 minutes ago