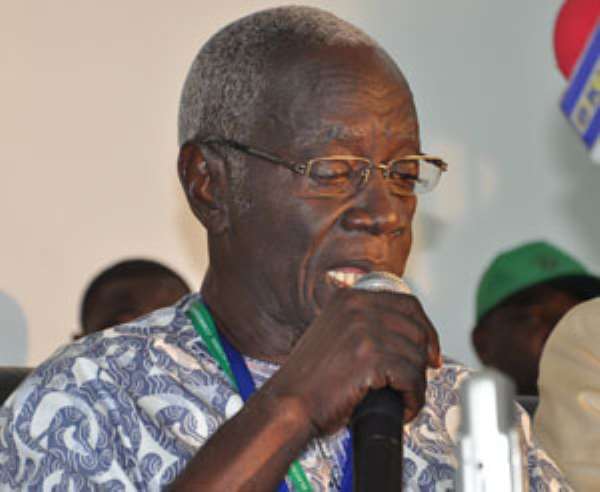 The significance of time can never be underrated in any human endeavour. In any economic or business activity, time is regarded as money. Time is so precious that when it is past, it can never be recovered.

This has given meaning to the adage; "Time and tide wait for no man". Since time remains one of the most influencing factors in a person's life, it is imperative for us to manage our time in such that we maximise it fully for our benefits.

It is against this backdrop that Nana Akufo-Addo and his NPP pleaded with the Chairman of the Electoral Commission to hold on to the announcement of the 2012 Presidential Election on 9th December, 2012. But, like the stubborn cat, this noble plea fell on deaf ears.

So personally, I don't see why Dr. Afari Gyan, with his Electoral Commission keeps asking for more time anytime the Supreme Court demands something from him. In February 2013, Dr. Afari Gyan wanted more time to bring details of the 241,524 Ghanaians registered abroad to the court. But, those "ghosts" were registered by the same EC so one would ask why does he need more time?

Just yesterday, Afari Gyan and his EC again prayed the court to review its order by directing it to file its written response “within five days from the close of the petitioners' case”. Why does Afari Gyan keep doing this and what is he up to?

All along I thought Afari Gyan was a time-conscious man. He rushed in creating 45 new constituencies against public will. He was so impatient to the NPP on 9th December, 2012, when the latter pleaded with him to give the party, at least, 24 hours to present evidence of electoral fraud before announcing the presidential results. But, his advice to the NPP was to petition the Supreme Court, if the party really had a case.

Today, this same man wants more time to file his written response. Who does he think he is? Was he not aware that he would be called upon to provide evidence at anytime, when Nana Addo and Co. were advised to proceed to court? You see, in this world it does not pay to lie or steal at all. It does also not pay to be wicked to your fellow human being. Stealing undermines your dignity, credibility, and integrity. It brings total shame to yourself and family and on this note, I have no pity for John Mahama and his collaborator, Afari Gyan.

I keep saying that anytime a person plans wickedness against his fellow human being, the level of his intelligence or common sense automatically comes down, if not completely lost. It is only after the person has committed the wicked act that he realises his mistakes, especially when he is caught red-handed. In other words, the culprit comes back to his senses as soon as he is caught; and his common sense prompts him that had he waited for a few minutes or hours, he could have probably saved himself from being caught. This is what is happening to both Afari Gyan and John Mahama. I'm sure the two accused persons regret ever stealing our mandate. They never ever thought the NPP would stretch this case to this far, but it is too late for them.

As you all know some of us will not lie to you at all. We will continue to champion honesty, diligence, patriotism, selflessness and all other virtues that befit us as humans. For instance, in order to be a key witness to the 2012 general elections, I went to Ghana for the biometric registration between March and May 2012 at my own expense. I left England again for Ghana in November 2012 , not only to campaign for Nana Akufo-Addo and Hon. Joe Osei-Wusu of Bekwai Constituency, but also to vote for them for progress.

It was obvious that Nana Addo was going to win and win massively. I had no shred of doubt on this belief. This motivated me to forget all the financial and other social costs I encountered. After all, a win for Nana Akufo-Addo and the NPP was a guarantee to free secondary education for every Ghanaian child, including my two lovely kids, Nana Yaa Boatemaa Agyemang and Ama Pokuaa Agyemang.

It was indeed, an abnormal for anybody to think that John Mahama would win, even in spite of the money he threw out. Apart from the limited time that he had to campaign, the NDC as a party had no message for Ghanaians. The "Edey bee kurkur" was no match to the NPP's Free SHS policy and any objective-minded Ghanaian and voter knew this fact.

The only option left for the NDC was to buy the conscience of Afari Gyan an his team, as well as that of some rented Media. Hence, John Mahama's confidence in expressing his "one touch" victory anytime he mounted the campaign platform. Candidate John Atta Mills, who even contested 6 presidential elections (including run-offs) never crossed the 51% mark, when he finally won in 2008. How much more John Mahama, who had barely 4 months of campaign time? Surprisingly, after winning the so-called 8 out the 10 regions, John Mahama could not get 51%, when past candidates with only 4 regions had crossed the 52% mark. Who is Afari Gyan kidding?

Admittedly, the NDC has, at least, 44% of the voting population, but there is no way this diabolic political party could beat the NPP in any election that is organised in a freely, fairly, and transparent atmosphere. Their argument that NPP agents were at the polling stations so no electoral fraud took place is totally flawed. If the presence of polling agents could prevent electoral fraud, then equally the instalment of sophisticated security equipment could do away with armed robbery and burglary at our residences. But this has not been the case as most Ghanaians are now victims of the activities of these muggers.

It's my fervent hope that the Supreme Court would let your vote, my vote, and our votes count in order to restore hope for Ghanaians. The level of insecurity in the country as a result of the numerous strike actions by public sector workers, massive corruption among public officials, prolonged energy and water crises, and abject poverty affecting Ghanaians are enough justification for the Supreme Court to save Ghana from total economic collapse.

Ghana deserves better. Ghanaians deserve better. Nana Addo Dankwa Akufo-Addo deserves better. I believe "Victory 2012" is still a reality! What about you, my fellow Ghanaian? I know you all do so let's all keep our figures crossed, for mother Ghana is on the way to making an unprecedented record in the annals of African politics.