A Journey From Aflao To Accra 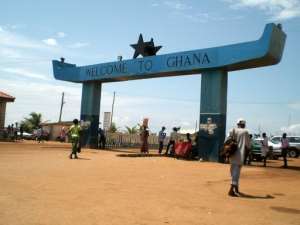 Though having visit the Volta region times without number after settling in Accra, this particular one was very important to me because I went to launch a journey in my life as a motivational speaker at age 19 at the speech and prize giving day of my former school, Spaco.

I had to return to Accra for other engagements too. So on Monday 25th March, 2013 I decided to return but because of the increased lorry fares, I had to board Metro Mass Transit which was cheaper because it is state-owned. After buying my ticket at around12:00noon, having nothing to do for the bus to set off, I then decided to browse the internet just for some fun.

Whiles I was waiting patiently in the bus, then came a small girl who also wanted to board the bus whom I directed to the conductor. But unfortunately the money she had wasn't enough so she was turned away by the conductor.

After an interrogation, she was sent to Kasoa, to inform her families there about the death of her only surviving nuclear family member, the mother. God be her comforter.

After a short while we were welcomed into the 'mini city' Sogakope by the sighting of the hospital. After passing through the toll booth, the driver stopped for us to purchase some foods for which the 'mini city' is well known for.

Hawkers with bread, icecreams, 'adordoe', abolo and fish, etc all came around doing quick marketing before the bus continued the journey further where we passed on the Sogakope bridge over the Volta lake.

The next town, Vume, was wonderful viewing the displays of handicrafts from clay such as; pots, flower pots, vase etc. Indication by a Vodafone signboard was we have only 108 km left to reach the capital cit.

It just looked that our driver wasn't that fast as we had several cars overtaking us but he was able to overtake a crawling tractor for us to venture into a dangerous curve which made our driver to extremely slow down. Now the time is 05:15pm and we were still in the Volta Region using a first class road with no potholes.

Approaching Accra, we arrived at Ada which gave an indication by a Vodafone signboard that we still have 94km to cover but just after some few meters a Vega signboard also said 85km. Which one is which? Even that day not being the first time seeing that, it baffled me that we can't have correct distance indicators to even give correct information to the public and most importantly our tourists.

Passing by lots of uncompleted buildings, just praying to see the billboard WELCOME TO THE GREATER ACCRA REGION, courtesy, ministry of tourism and there it was. Wow now I had hope that we have arrived in another region but the same country.

Passing by the Ghallywood African film village, it was the only building we sighted as all were just savannas with electricity polls covering them. 55Km more to cover? I was already feeling pains at my back. We then arrived at the final police check point for a pass into the region at Dawheanya. Here we were back into another savannah land with no houses but only central university college, one of the premier private universities in Ghana with lights showing through the window, meant darkness is dawn and it is already evening.

So for over 3 hours we were still on the journey to Accra. Now, we are in Tema and driving on the highway built by the First President of Ghana, Dr. Kwame Nkrumah, Tema Motorway.

Now, seeing nothing but only the headlamps of cars we then also had a stop at the Tema roundabout where some people alighted. Driving all the way to Accra, we arrived there at exactly 07:14pm., saying goodbye to the little girl. I set off to my home. Thank you