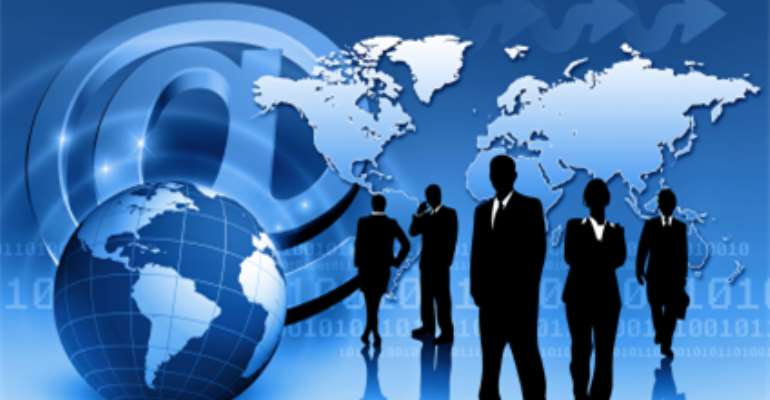 “Globalization has changed us into a company that searches the world, not just to sell or to source, but to find intellectual capital- the world's best talents and greatest ideas”.

(JACK WELCH)
According to Wikipedia, globalization is the process of international integration, required due to the increasing connectivity and interdependence of the world's markets and business.

According to Anthony Giddens, a British sociologist, “globalization can thus be defined as the intensification of worldwide social relations which link distant localities in such a way that local happenings are shaped by events occurring many miles away and vice versa”.

The post World War II made some countries more powerful than others. Some countries were characterized as superior and hence were seen as independent of the rest of the world. They were even said to cause the economies of other nations to catch cold “when they sneeze,”

Globalization and its co-names such as the world is a 'global village' has come to be appreciated by all and sundry. However, it must be put on record that human interaction over long distances has existed for thousands of years.

Just as no human is an island, so are the economies of the world's nations. Globalizations have taken many trends in our world; most importantly is the integration of nation's economies to promote an increase in world's output.

All sector of a nation's economy, such as its service sector, industries, levels of income and employment; and living standards are all linked to the economies of its trading partners.

Gradually through globalization, nations previously viewed as powerful nations have lost their superiority. This is because to be able to exercise your superiority, it depends on the economies of other nations. How then can you boast of been superior to the other? New trends such as conferences to foster the importance of globalization is, but one of the tools to create the awakening of globalization.

In the past 60 years, the world's market economies have become increasingly integrated. Exports and imports as a share of national output have risen for most industrial nations, while foreign investment and international lending have expanded. Integration of economies of different nations breeds mutual advantages. It breeds advantages for the trading partners. It helps nations to take advantage of specialization and efficiencies of large scale of production through absolute or comparative cost advantage.

Globalization have led to social, political and economic integration whereby things happening in a local and long distance areas are linked to the happenings of economies of many miles away.

FACTORS TO ACHIEVE GLOBALIZATION
Globalization is been instigated and facilitated by several factors. Among them is;

TECHNOLOGY
The first and perhaps the most powerful factor which promote globalization is technological change. More recently, rapid developments in computer information and communications technology have helped to shrink the influence of time and geography on the capacity of individuals and businesses to interact and transact around the world. Through the improvements in technology, there has been a tremendous extension in the scope of what can be produced and where it can be produced, and advances in transport technology have continued to bring people and businesses closer together. The boundaries of tradable goods and services have been greatly extended due to the emergence and improvements in technology.

FALLEN TRANSPORTATION COST:
The effects of transportation and communication in modern day transportation cannot be overlooked. People are able to move from one part of the world to another much easier than at any previous times in history due to the quick access to transportation. Moreover, communication is faster and more reliable than ever before. Satellites transmit images and voices instantaneously across far distances and the internet allows people to communicate regularly and extensively.

LIBERALIZATION OF TRADE
Continuing liberalization of trade and investment has occurred as the result of multilateral trade negotiations. Trade restriction measures such as tariffs, quotas have come down from high double digits to about low single digits. Thus, many barriers towards international trade have been removed during the turn of the 20th century.

WHY GLOBALIZATION?
Does globalization make some nations poor whiles enriching others? Why is globalization so important in our modern trend of existence?

Globalization leads to specialization which eventually leads to increase in world output. Through globalization, individuals, firms and nations specializes in the production of goods and services they do well in and use the earnings from these activities to purchase from others, items for which they have little advantage.

Globalization then again breeds competition. Through the comparative cost advantage concept, international trade leads to competition which is a requisite for effectiveness and efficiency. Competition leads to innovativeness. Competition helps keep domestic producers on their toes and provides them with a strong incentive to improve the quality of their products.

The most pressing question that one might want to put across is; how well are we prepared as a continent to embrace the numerous advantages of globalization? We as black Africans, covering the minority section in the world's economic market must make policies geared towards improving on contribution and participation on the international world market.

Infrastructural and technological capacity of our regions must be improved. There must be a high level of skilled human capacity to implement international policies.

“All those process by which the peoples of the world are incorporated into a single world society-GLOBALIZATION”…Martin Albrow, a Sociologist