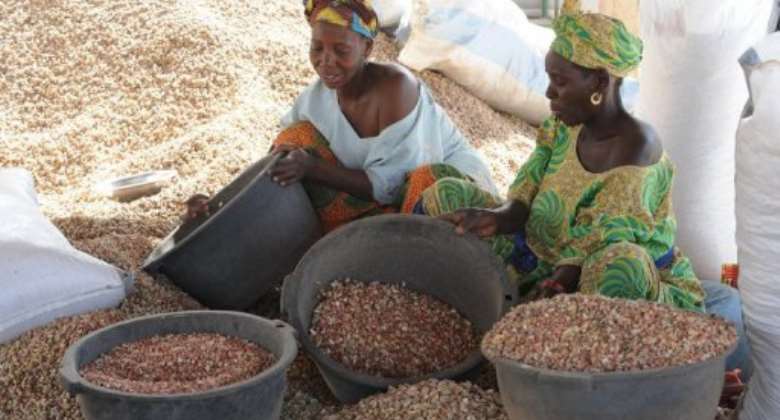 Women sort peanuts on February 23, 2013 in the central Senegalese village of Dinguiraye. By Seyllou (AFP/File)

DINGUIRAYE, Senegal (AFP) - High walls protect a Chinese peanut warehouse in central Senegal, where the product is becoming the new "gold" for farmers bypassing local traders to sell to Asia at inflated prices.

Beneath an asphalt road leading into the village of Dinguiraye in the west African nation's "peanut basin", the shelling factory is an imposing site on the savannah of dry grass and stunted trees.

"We prefer to sell our peanuts to the Chinese for between 250 and 260 francs (about 0.30 euros, 0.40 dollars) a kilo. Prices sometimes even reach 300 francs in the weekly markets," said farmer Oumar Thiam.

This is significantly better than the 190-franc maximum fixed by the state, he pointed out.

"This is the first time that peanut prices have reached this level and it is thanks to the Chinese," he told AFP.

In the nearby village of Sanguel women sort peanuts in the presence of supervisors, some of them Chinese.

"Filming, photography and talking to the workers is strictly prohibited," a Senegalese foreman advised firmly.

"I buy the farmers' peanuts and I shell them before selling them to China, Russia, the Philippines and Malaysia," said Dong Yang, a local Chinese boss who was one of the few foreign exporters willing to talk about his business.

Peanuts, introduced by French colonists, continue to play an important role in the economy as the main cash crop in Senegal, providing employment for 60 percent of the population.

They are transformed into oil, powder or paste for use in many recipes, including "thieboudienne" (rice with fish), a national dish, while by-products include animal feed from seed residue and fuel from the shells.

Peanut production has declined in recent years however, mainly owing to a lack of rainfall and a drop in prices.

Peanuts have been available for export since sector regulations were eased nearly three years ago but producers are concerned that exports could now soar given increased interest from buyers in China.

"Farmers now lay down the law because there are many foreign buyers," trader Habib Thiam said.

"The peanut is becoming the gold of the peasant farmer, having once been the gold of the millers" who paid growers poorly and made substantial profits when they sold their transformed peanut products.

"The rush into the Senegalese market is (now) discriminating against millers who are finding it increasingly hard to get hold of peanuts from farmers," Diallo said.

"This is a catastrophic year for our factories, which will only work for one month out of 12 because of this unhealthy and unfair foreign competition," said Bouba Aw, head of a peanut millers' trade union.

He called for laws "to supply as a priority local mills which employ about 5,000 people including 2,000 in permanent jobs".

In addition, he said that the opening up of the industry would lead to "problems with the availability of peanut seeds" owing to increased shipments abroad.

But local producer El Hadji Ndiaye said: "Senegalese farmers have grown peanuts since the 19th Century. They have always managed to get seeds and will always keep seeds in reserve."