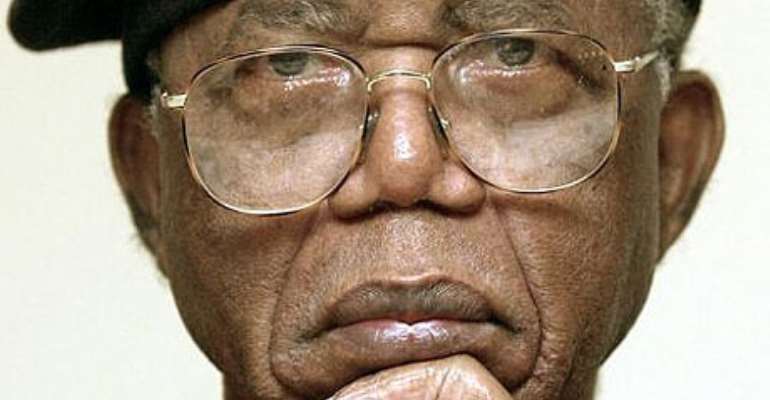 True, as Soyinka observes, Things Fall Apart, Albert Chinualumogu Achebe's first novel, “is a work of extraordinary power and insight. It remains one of the best-known works by the Nigerian writer, whose career has spanned over 50 years and encompassed essays, poetry, the short story and the novel.” But, 'Things Fall Apart' probably his most popular, was only one of many other important works by the Igbo Scholar. Beyond the popular quotes in the rest, particularly the line about the bearded meat in 'Arrow of God', many Ghanaians are impatient to cupboard Achebe in the 'gyre' of the classic 'Things Fall Apart.' We have not read his other works.

While Achebe makes it clear before the opening pages of 'Things Fall Apart' that the title was yanked from William Butler Yeats' poem 'The Second Coming', many Ghanaians trooped to Facebook to quote portions of Yeats' poem in celebration of the dead when news broke that Achebe had joined his ancestors, as his people would usually put it. A FB friend proudly posted on my wall: “Turning and turning in the widening gyre, the falcon cannot hear the falconer….How could he die with all that wisdom?” Where they got it right, they only showed that they had not read his other classics by copiously quoting from 'This Fall Apart' to make sure nothing fell apart. Achebe was much bigger and larger than one novel, the people of Ghana should know by now. He was bigger than Africa; but he remained Nigerian because he was a man of his people who loved his traditions and customs.

I would be honest to confess that I haven't read many of his other works. Well, 'Things Fall Apart' was a prescribed text for secondary school students, so everybody read it–by compulsion. It was a similar compulsion that made me read 'Arrow of God' because my lecturers at Legon had recommended it during discussions of Kofi Awoonor's 'This Earth, My Brother'. It was also because 'Arrow of God', 'Things Fall Apart' and 'No Longer at Ease' were in those days referred to as The African Trilogy. The name T.K Winterbottom in 'Arrow of God' made my day. I wouldn't say I had a masterful appreciation of the various issues the novel thematised. I had mostly followed the narrative just like an amateur consumes an apprenticeship novel. And frankly, I didn't do a great job with Things Fall Apart; I read it when I was in form three. Our teacher wore oversized shoes to class, so we nicknamed him Okonkwo's Yokohama.

Mumuni Mohammed, a colleague who couldn't pronounce Ikemefuna's name, still bears the name of the Achebe character nearly 24 years after we slapped it on him. You didn't see your friends reading books besides the prescribed texts. Not that they did a particularly good job at the reading and analysis of those texts; they 'mouthread' them and copied the same examples by our teachers during examinations. Anybody who managed to quote a few lines from Kwesi Brew's Dry Season, or David Diop's Vultures, was our Soyinka. Macbeth was popular then, and if you did English at sixth form, Coriolanus and Romantic poetry became your Bible. Even at that level, it was mostly obvious that folks had not consumed a syllable of the texts when they were pinned down to say something thematically relevant.

As we mourn Achebe today, we should be asking ourselves why African literature (or let's limit ourselves to West Africa, particularly Ghana and Nigeria) may never sell better than Harry Porter or Fifty Shades of Grey. Let's rest the debate on whether the Western media's description of Achebe as an African literary great, instead of a world great, is apt or just typical. But frankly, beyond academic and scholarly circles, and in Nigeria, where he is a whole institution unto himself, who else in the world knows about Professor Chinua Achebe? Even W.S, it is said, still needs some discovering beyond obvious circles. And by W.S I mean Wole Soyinka, but you were also pardoned if you misread it as William Shakespeare. It makes sense.

We have learned to tell our story by now, so we wouldn't look on while every narrative in the forest glorifies the hunter. And we have a lot of quality people to help us tell our beautiful stories. Chimamanda Adichie, Ben Okri, Ola Rotimi (fare thee well), W.S, Femi Osofisan, Cyprian Ekwensi, Pepper Clark, and from our side Ama Ata Aidoo, Ayi Kwei Armah, Kobina Sekyi, Kofi Awoonor and Chiraa-born Nana Yaa Opoku-Sakyi, my friend's daughter who at 14 is churning out material that may soon make creative sense. Even with Achebe in the lead, would these be able to tell our story better? Oh I am sorry, I almost forgot Uncle Ebo Whyte. Me? Ask, Professor Richard Tettey Addo, a lecturer at a Tennessee University, who thinks I am such a let down. The academic has been urging me to either complete my novel, which had been in the works before Reagan was born, or shelve it altogether and partner him pen a good story he has sketched.

Things are picking up lately. There are a few bookshops here and there and some schools in Accra have started reading clubs, where they would learn to read Chinua Achebe's many other great stories. Sleep well, Prof Achebe.