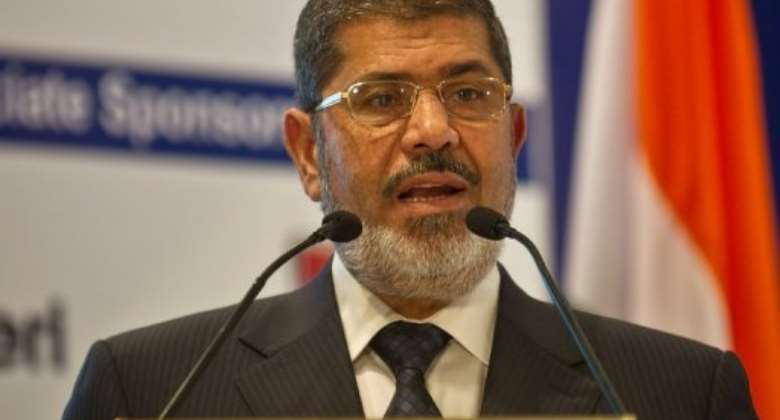 Egypt has been battling to restore investor confidence, which has suffered a sharp downturn since the "Arab Spring" uprising that overthrew authoritarian president Hosni Mubarak in February 2011.

"I am hoping BRICS becomes E-BRICS with 'E' standing for Egypt" as the economy picks up, Morsi said as he ended a two-day visit to traditional ally India aimed at promoting bilateral trade and investment.

Morsi said he had been invited to attend the next summit in Durban this month of BRICS -- an acronym for Brazil, Russia, India, China and recent member South Africa used to designate the bloc of large, fast-growing economies.

"Egypt is hoping to join this group," he told a business forum.

Morsi urged the BRICS nations at the Durban summit to push ahead with proposals for a joint south-south investment bank that would allow countries to pool resources for infrastructure and other projects.

Morsi, on his maiden trip to India since being elected in Egypt's first free presidential polls, said his country is headed for a "new era" of development.

The president, who held talks with Prime Minister Manmohan Singh, added he hoped bilateral trade could double from $5.2 billion currently to $10 billion "within the next next few years".

Morsi, who faces troubles at home with a lower court's cancellation of a controversial parliamentary election he called for April, insisted his country is on the final leg of its transition to democracy.

"Egypt has been witnessing a transition toward democracy and we're confident we're ending this transition stage," said Morsi, who belongs to the Freedom and Justice Party, the Muslim Brotherhood's political arm.

"This will help us achieve political stability and start a new era of economic development," he said, promising to welcome Indian investors.

Court adjourns case between Asanko Gold and GMWU to June 1 o...
14 minutes ago