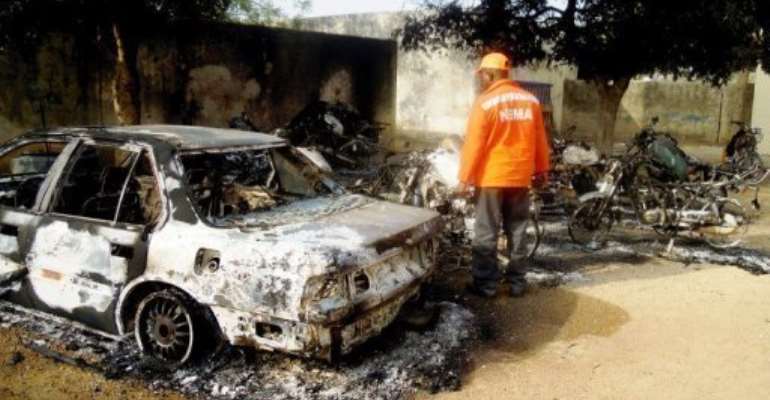 A rescue worker inspects the wreckage after explosions in Kano on January 21, 2012. By Aminu Abubakar (AFP/File)

KANO, Nigeria (AFP) - Wounded survivors on Tuesday described the terrifying scene of a suicide attack at a Nigerian bus station that killed at least 22 people, the latest violence to hit the restive north.

At least 22 people were killed and 65 others were wounded, Majia said.

"I was boarding the bus to Lagos when I heard a huge explosion," Abdulaziz Baban-Lamma, a 47-year-old trader, told AFP from his hospital bed.

The blast left him with severe injuries to his abdomen and other survivors ran to assist him when they saw his condition, he said. He later underwent emergency surgery.

"May Allah curse whoever was behind the act," he said.

Magawata Goje, 45, was selling dried meat at the station when the bomb went off.

"Something sharp hit me under my right ear," he said.

"Blood gushed out and I was drenched in my blood."

When he regained consciousness, "I could see many people burnt to death," he said.

Emmanuel Bassey, a 37-year-old bus company employee with burns across his body, said the bombers slammed into one of the buses at high speed.

President Goodluck Jonathan condemned the attack and said his government would continue "its unrelenting war against terrorists."

But the government has so far shown little ability to halt violence linked to an insurgency by the Islamist extremist group Boko Haram.

It was also attacked in January last year in a blast that wounded several people.

Authorities have not said who was behind the bombing and there has been no claim of responsibility, but it was similar to previous attacks by Boko Haram.

Kano has been repeatedly targeted by the group, blamed for killing hundreds in the region since 2009.

Its deadliest assault yet occurred in the northern city in January 2012, when at least 185 people were killed in coordinated bomb and gun attacks.

The country's main Christian association CAN -- currently led by evangelicals -- issued a statement on Tuesday saying recent attacks "were a signpost of the intended extermination of Christians and Christianity from northern Nigeria."

Prominent Catholic leaders have however been much more measured in their reactions to the violence, saying the extremists seem intent on provoking a religious crisis. They have urged Christians and Muslims to work together for peace.

Boko Haram's targets have included symbols of government authority, churches and Muslims it views as collaborating with the government.

A suicide bombing of UN headquarters in the capital Abuja in 2011 killed at least 25 people.

The group has claimed to be fighting for the creation of an Islamic state, though its demands have repeatedly shifted.

It is believed to include various factions with differing aims. One splinter faction, Ansaru, appears to have focused on kidnapping foreigners.

Boko Haram itself had not claimed any kidnappings until recently, when it said it was behind the abduction of a French family of seven over the border in Cameroon.

Many analysts have said poverty and neglect of northern Nigeria, which remains underdeveloped when compared to the oil-rich south, have helped feed the insurgency.

Despite the country's oil reserves, most of Nigeria's population lives on less than $2 per day, with corruption deeply rooted.

The military's violent response to the insurgency has also worsened the situation, according to rights groups and activists in the region.

Violence linked to the insurgency in northern and central Nigeria, including killings by security forces, have left some 3,000 people dead since 2009.