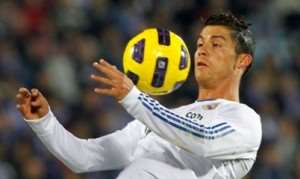 Real Madrid superstar Cristiano Ronaldo is among the 100 world-class footballers set to arrive in Ghana for the country's biggest sporting event this year.

Michael Essien, the Ghana superstar who plays for Real Madrid, has invited some of the world's best players to play in Accra between World IX and Africa IX in June to raise fund to promote peace in Africa.

Some of the world's best players from Spain, England, Italy, France and Germany have been invited to play in the friendly game dubbed  'A Game Of Hope And Inspiration'.

A three-day mammoth event has been planned with a music concert with some of the world's and Africa's best musicians in attendance.

Some top ex-players like George Weah, Marcel Desailly and Freddy Ljunberg are all expected to also play in the game to raise money for charity in Ghana.

Reigning African Footballer of the Year, Yaya Toure and his brother Kolo Toure, as well as Nigerian superstars Nwankwo Kano and Daniel Amokachi have confirmed their participation.

The event is expected to be the biggest sporting event in Ghana in 2013, similar to the charity match which Essien hosted in 2011.

Essien is a Peace Ambassador appointed by the African Union in 2010 to use his status as an African and international footballer to promote peace in Africa.

The latest Essien initiative is expected to create huge awareness of the need for Africans themselves to make an effort to inspire the youth towards peace, hope and inspiration.