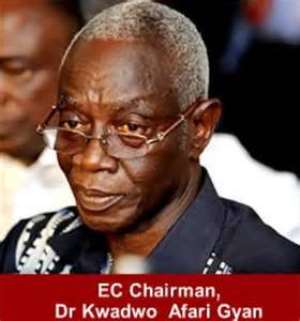 To ensure a credible voters register in future, the Births and Deaths Registry has called on the Electoral Commission (EC) to utilise their data for the preparation of the register.

The Registry, according to them, has credible data on Ghanaians, which is enough for the Electoral Commission to use for future registration exercises.

Speaking to The Chronicle in an interview, the Assistant Registrar for the Ashanti Region, Mr. Nicolas Osei Bonsu, noted that such moves would help eliminate the issue of minors being registered by the EC.

Mr. Osei Bonsu also suggested that other institutions such as the security agencies, having to do with the ages of Ghanaians seeking to be employed by them, could also tap their data for such exercises.

'Football clubs and the banks, which are more interested in the ages of players and information on their clients, could also utilise our data whenever they want to recruit new players or advance loans to their clients.'

Elaborating further on the new data system acquired by the Registry, Mr. Bonsu disclosed that the new data system, which has been in use since 2009, records details of any person who comes to them for the registration of his or her date of birth.

He further revealed that the new birth certificate being issued currently by the registry is electronically coded. According to him, the code given cannot be tampered with, and such a code could be used by any establishment for detailed information of the bearer anywhere in the world.

Explaining the rationale behind their call on the EC to liaise with them whenever it was conducting any registration exercise, he said their system could be used, because it had the precise ages of the people who had attained the age of 18.

Deaths registration
Touching on registration of deaths, the Assistant Ashanti Regional Registrar disclosed to The Chronicle that for the two years under review, the Registry registered 10,911 and 11,000 deaths respectively.

Mr. Bonsu hinted that the deaths registered excluded those from the Muslim community.

He, therefore, appealed to the Muslim community to register their deaths, in order to help keep track of the number of persons who died in a particular year.

The Registrar warned that very soon the Registry would begin arresting all those who bury their dead relatives without a permit from his outfit.

Mr. Bonsu said registering of the dead helps the government to do proper planning, and also establish the course of deaths, in order to adopt certain measures to tackle the sicknesses that were highly causing deaths.

According to Mr. Bonsu, malaria, as per their medical reports, leads the chart of deaths registered in 2011 and 2012, with diabetes and liver-related diseases occupying the number two spot, while accidental deaths trailed at the third position.