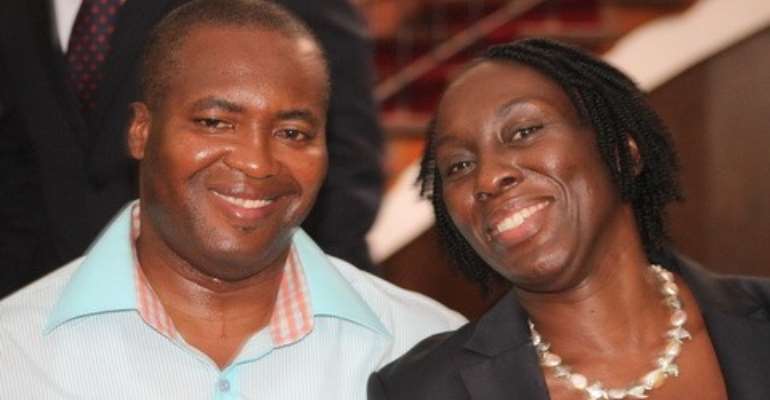 The Attorney-General and Minister of Justice, Mrs Marietta Brew Oppong Appiah, is challenging a purported $28.5 million judgement debt that has been awarded against the state.

Documents filed by the Attorney-General's Department seeking to set aside the said judgement indicate that no court had awarded the $28 million to Sweater and Socks, the plaintiff in the case.

To prove her resolve to ensure that the money was not paid to the claimant, Mrs Oppong Monday appeared at the High Court, presided over by Mr Justice Godwin Gabor, and prayed the court not to entertain the claimant because it had no cause for action.

“The applicants should show us where there is an order for payment. There is no claim for an order of payment to be awarded or whatsoever,” she emphasised.

But a visibly upset counsel for the plaintiff, Mr George Eshun, who disagreed with the state, turned to the A-G and said, “She should not let mud be thrown at her.”

In an apparent response to the state confiscating the asset of his client, Mr Eshun informed the state that it was expected to account to his client.

The court was expected to deliver its ruling on whether or not to cite the acting Governor of the Bank of Ghana (BoG), Dr H. K. Wampah, for contempt of court for failing to obey a court order to pay the money to the plaintiff but had to adjourn proceedings because the governor was absent.

Counsel for the acting governor, Mr Samuel Kodzo, informed the court that his client was on a national assignment and could not make it to court.

Since contempt of court was a quasi-criminal issue, the physical presence of the acting governor was needed for the court to give its ruling.

It is also expected to hear the state's motion to set aside orders and proceedings of the High Court, presided over by Mrs Justice Elizabeth Ankumah, which granted the plaintiff permission to file estimates that eventually ended at $28.5 million.

A Chief State Attorney, Mr Clarence Kuwornu, also prayed the court not to commit the acting governor for contempt of court and rather suggested that the court hear the state's version in order to arrive at a conclusion.

Mrs Oppong was accompanied to court by the Solicitor-General, Mrs Amma Gaisie; a Principal State Attorney, Mrs Sylvia Adusu, and other state attorneys.

The Background to the case:

The plaintiff, Sweater and Socks, dragged the Attorney-General and seven occupants of its factory which was confiscated by the state through AFRC Decree 38 to court in 1994.

The other defendants in the case are the National Industrial Company, the African Bagg Company Limited, Madam Sophia's Company, Poly Products Limited, Fay International Limited and United Waters Limited and Golden Tower Limited, all tenants of the plaintiff's property.

It requested the court to declare that the true legal position now was that Sweater and Socks had not been confiscated and was, therefore, entitled to carry out its normal business operations.

The company also sought an order for the recovery of possession of the factory premises and all the machinery and or equipment thereof from the hold of the National Industrial Company.

On April 8, 2003, the High Court, presided over by Mrs Justice H. Inkumsah Abban, gave judgement in favour of the plaintiff for all the reliefs claimed.

The court held that plaintiff company was entitled to all its reliefs, as endorsed, and in 2010 the plaintiff obtained leave of the court to recover possession of the factory premises and duly recovered possession.

Following the grant of the reliefs sought by the plaintiff and subsequent orders of the court and the failure of the BoG to pay the money, the plaintiff instituted the contempt proceedings against Dr Wampah.

But the state is arguing that the garnishee orders were born out of void procedures and orders and for that reason they were “null and void and of no effect and should be set aside”.

“Furthermore, the plaintiff, in its writ of summons and statement of claim, never made a claim for recovery of any sum of money or for damages, whether general or special,” the state has argued.

It also argued that the judgment of Justice Abban (Exhibit AG3) never made any orders for the recovery of money by the plaintiff from the 1st and 2nd defendants and that assuming without admitting that the ruling (Exhibit AG8) of Justice Ankumah was valid, the said ruling never ordered the payment of any money.

In a motion challenging the plaintiff, the Attorney-General's Department is praying the High Court to set aside as void orders and proceedings of the High Court.

Consequently, the state is praying the High Court to set aside the following:

• An amended estimates of costs of machinery and running of Sweater and Socks factory filed by the plaintiff on May 27, 2011.

• The subsequent ruling of Justice Ankumah dated the 16th day of May, 2012 given the trial proceedings /hearing.

One of the reliefs granted by the judgement of Justice Abban was for the defendants to provide “comprehensive account of all use and/ or transactions carried out by the 2nd defendant on the premises of the factory floor and or use of any equipment by same.

An affidavit in support of the state's motion deposed to by Mr Kuwornu said on February 14, 2011, the plaintiff obtained a further order for the Attorney-General and the National Industrial Company to render accounts within 14 days.

But because of the failure of the Attorney-General and the National Industrial Company to render account within the specified time, the plaintiff, on May 27, 2011, “filed on several A4 sheets of paper what it described as Amended Estimates of Costs of Machinery and Running of Sweaters and Socks Factory”(herein referred to as the “Amended Estimates” ) putting the total of its estimates at US$28,595,600”.

No rule or procedure on estimates

According to the affidavit in support, there was no rule of law or procedure that gives a plaintiff the authority to file “estimates” when a defendant has failed/refused/neglected to comply with a judgment to render accounts.

“That filing of 'estimates' by a plaintiff is not a procedure for enforcing a judgement/order for a defendant to render accounts,” the affidavit pointed out and further argued, “Justice Ankumah, on July 27, 2011, nevertheless accepted the amended estimates filed by the plaintiff in lieu of the accounts to be rendered by the Attorney-General and the National Industrial Company.

It said Mrs Justice Ankumah “had no jurisdiction to accept the amended estimates filed by the plaintiff in lieu of the accounts to be rendered by the Attorney-General and the National Industrial Company.

According to the A-G's Department, the ruling, which it had attached as an exhibit, had the effect of “reviewing/amending the judgement of Justice Abban, which simply required the A-G and the National Industrial Company to render accounts.

The affidavit in support said on May 16, 2012, the certificate issued under 15(1) of the State Proceedings Act, 1998 (Act 555) which ordered the BoG to pay the plaintiff the sum of $28.5 million “did not represent the judgement of Justice Ankumah, let alone that of Mrs Justice Abban, and are, therefore, null and void and of no effect and ought to be set aside”.