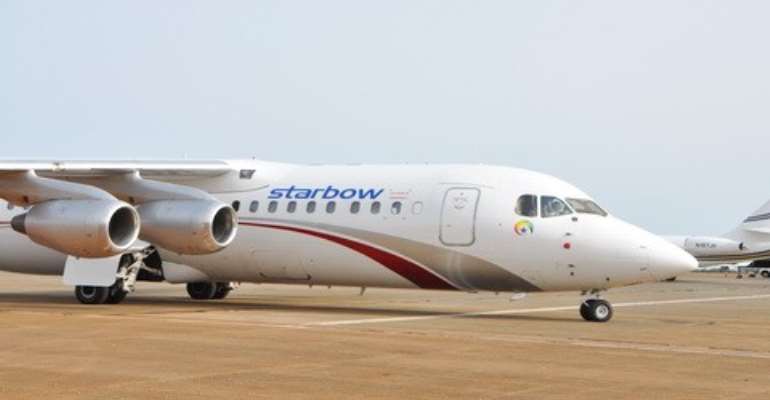 Aero Surveys Limited (“Starbow”) and DVB Bank SE (“DVB”) have signed an agreement in which DVB will assist and advice Starbow on its fleet renewal and aircraft selection process.

DVB's role in the agreement would include advisory on the selection, integration and procurement of a new fleet for the airline.

A statement released Monday said the appointment of DVB was crucial in assisting Starbow to renew its fleet in order to achieve its medium and long term goal of expanding its services across West Africa. And to efficiently connect its main city pairs, many of which remain grossly underserved.

Captain Nimoh Kwaku Mensah, Starbow's Accountable Manager said: “We are delighted with our association with an industry leader such as DVB; their assistance will help our management team accelerate our regional expansion plans.”

Starbow´s Head of Commercial, Andy Smith, said the Bank would bring a wealth of aviation and finance experience to the table, and the company looks forward to a new fleet optimised for future growth plans.

Bertrand Grabowski, a member of DVB's Board of Managing Directors noted: “Africa is an almost unknown territory for DVB Aviation and is clearly a continent that is rapidly changing and evolving. We have been impressed by the strength of Starbow's management and the vision shared by its shareholders.

“This undertaking will help Starbow in a critical phase of its development and we are very proud to have been selected by the airline for this task.”

As well as having the largest fleet in Ghana, Starbow also has more than 46 departures per week to Kumasi, Takoradi and Tamale, with the aim to become West Africa's premier airline through its core values of safety and reliability.