Cost of pastors pilgrimage to Jerusalem is 600,000 dollars not two million dollars 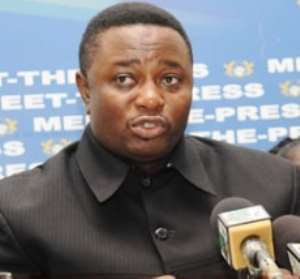 Accra, March 18, GNA - Mr Elvis Afriyie Ankrah, Minister of Youth and Sports, said the total cost of the sponsorship package for the 200 pilgrims is approximately 600,000 dollars, and not two million US dollars as published by some news papers.

He said the package includes airfare, hotels and feeding and it was absolutely untrue that each pilgrim was given 10,000 dollars per diem.

A statement signed by Mr Elvis Afriyie Ankrah and a copied to the Ghana News Agency on Monday said many had questioned the priorities of government based on reports that contained a lot of inaccuracies and misleading assertions intended to cause mischief, ridicule and public disaffection for the government.

'Some also expressed outrage over the supposed cost of the trip which was reported by the Daily Guide Newspaper to be in the region of 2 million dollars.

'I would have ignored these frivolous reports and treated them with the contempt they deserve. However, I deem it necessary to state the facts in order to disabuse the minds of right thinking and discerning Ghanaians of the negative impression the reports seeks to create,' the statement said.

The Daily Guide Newspaper, in its Tuesday, March 12, 2013 edition and another on Thursday, March 14, 2013 edition, said the government was sponsoring some 200 pastors affiliated to the ruling National Democratic Congress (NDC) for a pilgrimage to Jerusalem, Israel at the cost of two million dollars.

The reports claimed the intention of the sponsorship was to show appreciation to the pastors for supporting the NDC, and also to enable them to pray in Jerusalem for President John Dramani Mahama to avert a doomsday prophecy about his life.

The reports also said the General Overseer of the Royal House Chapel International was part of the trip, 'particularly due to his close relations with the organizer of the trip, Elvis Afriyie Ankrah, the Campaign Co-ordinator of John Dramani Mahama 2012 Presidential Campaign and currently the Minister of Youth and Sports.'

"The agenda to create a sensational news story for gossip and discussion can be seen by the claim that some of the pastors and groups have rejected the offer because they deem it wrong to spend a huge sum of money on a pilgrimage when the government needs resources to tackle socio-economic problems.

"Clearly, the above stated issues and points raised by the paper are total fabrications and a pack of lies geared at tarnishing the image of the President and the Government," the statement said.

The statement said over the years, various Christian and Church organizations have called on government to sponsor and address the various challenges they had encountered during their holy trips to Israel.

It is in response to these several calls that government then decided to facilitate and coordinate the Pilot Pilgrimage to Israel, to help address some of the challenges Christian groups have encountered on past trips just as government had been doing for the Holy Muslim Pilgrimage to Mecca.

In the process, and with the increase in the number of pilgrims, some Ghanaian philanthropists offered to provide sponsorship for this year's trip.

Government then held several discussions and consultation meetings with key stakeholders and subsequently, the decision was duly communicated to the leadership of the various Christian bodies through official letters and phone calls.

Contrary to claims that this is a thank you gesture to pastors affiliated to the NDC, government had no role in the selection process. It is important to note that, government left it to the various groups to use their own criteria to select prospective pilgrims based on the number allotted to them.

The statement said the organizers had not yet received a list from the Ghana Pentecostal and Charismatic Council, where Rev. Sam Korankye Ankrah is the Vice Chairman, exposing the Daily Guide Newspaper fabrication that Rev. Ankrah was part of the trip.

It said the role of Elvis Afriyie Ankrah was to coordinate the pilot pilgrimage and had nothing to do with his former position as the John Mahama 2012 Campaign Coordinator.

'A number of the Christian bodies welcomed the initiative, however although the Christian Council of Ghana was happy with the initiative it responded in a letter that it could not provide representatives for the trip because of time constraints and not because it did not want to participate as stated by the said paper.

"In fact they intimated in their letter to be part of any subsequent pilgrimages when given sufficient notice,' the statement said.

It said it was also untrue that during the tenure of former President J.E.A Mills, he organized a similar trip and gave each person ,000 as per diem.

"Again for the records, the Government is not sponsoring the trip from the state coffers but only facilitating and coordinating the process and has no involvement in the selection of the prospective pilgrims from the various bodies that would suggest an NDC Pastors Pilgrimage.

"Finally, it is deeply heart-warming that even at the time of releasing this statement, several Christian organizations, churches and pastors have requested, appealed and submitted names to be added to the list.

"For them, the opportunity to trace the footsteps of Jesus Christ and walk where he walked, pray for their families, their churches and their country Ghana, is an opportunity they do not want to miss and a potential life transforming event," the statement said.