One bride for five brothers 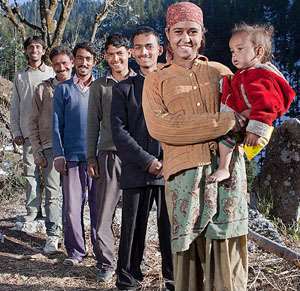 Rajo Verma, 21, lives in a one-room shack with all five, sleeping with a different one each night on a rota.

The housewife has no idea which one is the father of her toddler son.

She said: 'Initially it felt a bit awkward. But I don't favour one over the other.'

Husband Guddu, 21 — the first to make her his bride — insisted: 'We all have sex with her but I'm not jealous. We're one big happy family.'

The couple got hitched in an arranged Hindu marriage four years ago and he remains her only official spouse.

But the custom in their village is she had to take as husbands his brothers Bajju, 32, Sant Ram, 28, Gopal, 26, and Dinesh — who married her last year when he turned 18.

Eldest brother Bajju said: 'I consider her my wife and sleep with her like my brothers.' Rajo cooks, cleans and looks after 18-month-old Jay while her hubbies go out to work in Dehradun, northern India.

She said of the ancient tradition, called polyandry: 'My mother was also married to three brothers so when I got wed I knew I had to accept all of them as my husbands.

'I sleep with them in turn. We don't have beds, just lots of blankets on the floor.

'I get a lot more attention and love than most wives.'