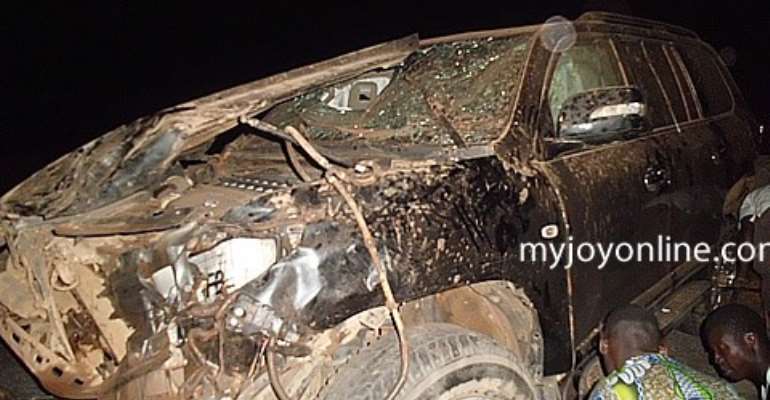 The accident was scary, sources say

The New Patriotic Party is accusing unnamed officials of the National Democratic Congress of plotting to assassinate its vice presidential candidate in the 2012 elections, Dr Mahamudu Bawumia.

Dr Bawumia was involved in a serious accident when the car in which he was travelling got involved in an accident and somersaulted several times. That was after the front tires of the vehicle burst.

The NPP leader sustained minor injuries but has been treated and discharged by doctors at the Lister Hospital in Accra.

Whilst Dr Bawumia is yet to recover from the schock and injuries from the accident, party executives claim they have cause to believe the accident was part of a “diabolic” plot by the NDC to assassinate the NPP vice presidential candidate who is one of the petitioners challenging the verdict of the 2012 General elections.

The General Secretary of the party, Kwadwo Owusu Afriyie told Joy News' Elton John Brobbey shortly before an official press conference that national security officials are behind the plot to assassinate Dr Bawumia and other leading members of the NPP.

He suspects the security officials had tampered with the tires of a brand new vehicle on which Dr Bawumia was travelling.

According to him, shortly before the accident, the chairman of the party Jake Obetsebi Lamptey also had the tires of his car bursting in rather bizarre circumstances.

He said the plot is a desperate attempt by the NDC and its security officials to wipe out Dr Bawumia and other key officials of the party who are are key witnesses in the ongoing presidential election petition at the Supreme Court.