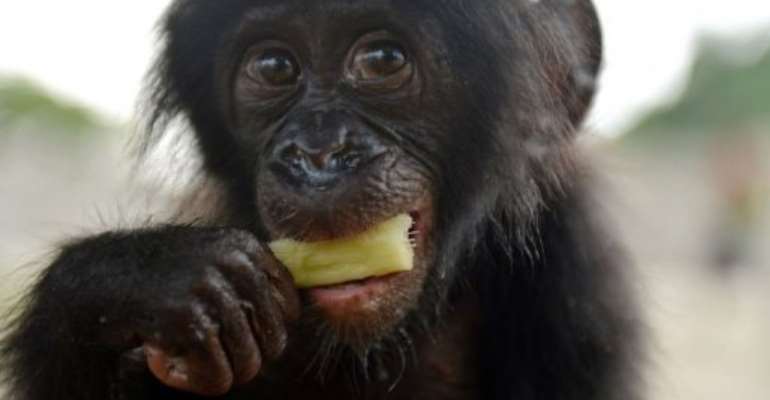 An orphaned bonobo eats sugar cane on March 5, 2013 after being rescued by staff of the "Lola ya bonobo". By Junior D. Kannah (AFP)

KINSHASA (AFP) - Claudine Andre, a 67-year-old Belgian living in the Democratic Republic of Congo, has spent the last 20 years dedicated to the protection of the bonobo, an extraordinary species of ape threatened by trafficking and poachers.

Walking out of the environment ministry in Kinshasa after lodging a request to rescue an infant ape on display at a local bar, she is visibly worried.

"We must go tomorrow," she frets. "I've seen photos - he's not three years old yet, he's just a few dozen centimetres in height, his nose is running. He's going to die."

To make sure the operation goes off without a hitch -- and for her own personal safety -- she will not be going herself.

The tyres on her car have already been slashed twice. But that's not enough to bother "Madame Claudine" as she is known here.

She has lived in the Congo for almost all of her life, having arrived when she was just four. A married mother of five, she set up her sanctuary, "Lolo ya bonobo" or "bonobo heaven", in 1993.

At her 35 hectare conservation area outside the capital she saves these remarkable animals from the clutches of the illegal animal trade.

Trafficking in bonobos is a lucrative business. According to Andre an infant bought for 50.000 Congolese francs ($55) can be resold for as much as $15.000 on the internet.

The young apes she rescues occasionally arrive sick, and they always arrive traumatised. First, they are handed over to a "surrogate mother", one of the many Congolese women working at the sanctuary who fuss over their charges, cuddling the infant bonobos for hours on end.

This crucial step in their rehabilitation can go on for weeks or even months until they've recovered sufficiently from their ordeal to be able to rejoin the rest of the tribe.

Eventually, they will be released back to their natural habitat: 275,000 kilometres at the heart of the DRC where they are encircled by the Congo river and the rivers Kasai and Samburu.

At the moment there are 70 residents at "bonobo heaven" waiting to graduate and rejoin their 15 former playmates who have already been sent into the outside world.

Estimated to number 100,000 in 1980, today there are just 10,000 to 20,000 bonobos left. Andre attributes their dwindling numbers to poaching, which has gone hand in hand with human population growth.

The DRC is a country of 68 million people almost the size of western Europe and ranked last on the United Nations' development index. Hunger and civil war has driven some to poaching and the sale of bush meat.

According to Andre, for every animal she rescues, 10 will have been killed by the poachers who leave only the babies alive - there's not enough meat on a baby bonobo to sell and it's far more lucrative to try and sell them on to traffickers.

A remarkable species, who share 98.7 percent of our DNA, bonobos have long fascinated anthropologists.

They live in matriarchal societies and are highly sexual, frequently using sex to express affection and in conflict resolution as well as for reproduction.

Bonobos are protected under the CITES treaty which forbids all trade in animals and plants threatened with extinction, but, despite this, the outlook is bleak.

According to the World Wildlife Fund, the traffic in live animals is worth 15 billion euros a year.

"It brings in more money than drugs," reflects Claudine sadly.

Andre claims that a Nigerian trafficker was behind a network of illegal animal sales in Asia and the Middle East, where, she said, some rich collectors set up zoos, bypassing legitimate channels available for animals who were born in captivity.

Next spring Claudine will go to the US to receive an award for her conservation work from the Columbus zoo in Ohio.

"I feel like I'm holding up a barrage with my own hands and, one day, I'll have to let go," she observed.

So Andre is putting her faith in the future in education. "I have hope that conservation will happen through education," she says.

"They're the ones who call me to tell me that there's a bonobo in chains somewhere," she smiles.