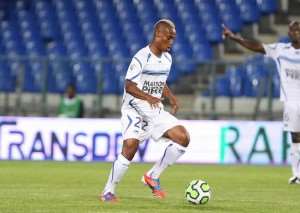 Hard time for Prince SÃ©gbÃ©fia. The Togolese midfielder of AJ Auxerre, game holder this Saturday against Lens in Ligue 2, was unable to finish the game (defeat of the Burgundians 1-0).

In the 70th minute on a bad action, togolese international holds the ankle. He goes out on a stretcher and later replaced by MeitÃ©.

SÃ©gbÃ©fia has followed from the bench with an ice pack on his ankle the only goal scored by Touzghar in the 79th minute.

For the moment, no details on the severity of the injury of SÃ©gbÃ©fia. The former player of Al Ain in the United Arab Emirates has not been convened by Didier Six for the next match of Togo against Cameroon.