Reminding The NPP Again To Be Resolute & To Congregate In Kumawu 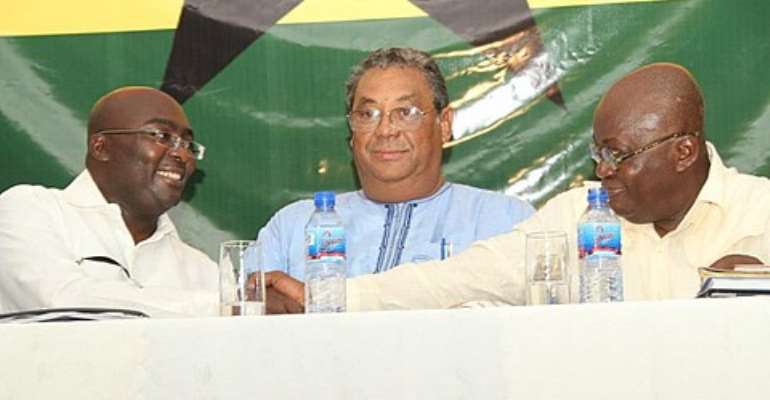 Over and over again, I have been reminding the NPP as a party, and as astute individuals aspiring to secure better things for Ghana and the entirety of Ghanaians to remain resolute.

They have resolutely to rally behind the leadership of their party. The leadership is seeking justice for themselves and Ghanaians at large over election 2012 irregularities, malpractices and clearly daylight robbery of the winning verdict from them by then presidential candidate John Dramani Mahama.

From the dreams and prophetic revelations by many and certain credible individuals, especially KOFI BASOAH of Asante-Juaben, God the Creator of all things, had on purpose selected Nana Akuffo-Addo Dankwah to rule Ghana from January 7, 2013. However, the NDC in collusion and connivance with the Chairman of the Electoral Commission, Dr. Kwadwo Afari-Gyan, rigged the election in favour of John Dramani Mahama, alias "Me be dii bi Keke".

As Mahama is ruling on stolen verdict, the tempestuous tide is ominously turned against him. He has lost his socio-politico-economic bearings. He is fumbling for words to explain the heat he is feeling sitting with mouth agape on the stolen thrown, with the crown on his head tilted towards the back of his head, almost coming off. Afari-Gyan on the other hand is dribbling on the mouth unable to explain certain situations and acts, especially how he came by the over 241,000 registrant Ghanaian voters abroad.

Why do I keep on reminding you to be resolute? In order not to make you appear lazy, always being spoon-fed like a toddler, I will require of you to go back and read my article published on Ghanaweb, modernghana.com and SpyGhana.com on Saturday 15 December 2012 titled, "NPP must be Resolute in their Fight". The answer is lying dormant in there.

Of all the revelations by God to the dreamers and prophets alike, that of Kofi Basoah has caught my attention most. Things are unfolding exactly as indicated to him in the dream. If and only if, all the NPP faithful and all discerning Ghanaians will join hands together, pray together and aspire for justice by resolute determination to support the cause taken by their leadership, they will soon see the glory of God. God is truthful, He does not lie as you and I do, being sinful human beings.

God has indicated that Nana Akuffo-Addo Dankwah was the winner of Election 2012. He, God, will eventually prove the veracity of His proclamation via His numerous prophets and dreamers at the Supreme Court, I assure all Ghanaians, whether you like it or not.

Nevertheless, one condition of remaining RESOLUTE must be met. What does to remain resolute mean, you may ask? It is simply believing in, and supporting, Nana Akuffo-Addo in all sincerity that he won election 2012.

I have other urgent issues to address so I may take some time off the internet to fulfil those most important obligations. However, the leadership of the NPP may have the opportunity to meet this Kofi Basoah whose dream has given me the courage to write in support of the NPP as I do. It has also permitted me to give hope to those who had otherwise lost faith in NPP ever emerging victorious from the dubious declaration of John Mahama as the President-elect and subsequently, been sworn in as the President of Ghana.

The fact that John Mahama has already been sworn in as the president is never an obstacle to God at all. God will through the available credible evidence the leadership of the NPP has submitted and will submit, touch the hearts of the Supreme Court judges to HONESTLY decide the case in favour of His chosen servant after His heart, Nana Akuffo-Addo Dankwah.

The bigwigs in the NPP and many more NPP faithful with discerning Ghanaians inclusive, will in the few weeks or months ahead, meet in Kumawu to mourn the late B.A. Mensah, a renowned Ghanaian industrialist and once the owner of the International Tobacco Ghana Company Limited (ITG). B.A. Mensah passed yesterday, Friday 15 March 2013 morning.

I will not go into details how P. V. Obeng collusively persuaded J. J. Rawlings to confiscate B. A. Mensah's ITG Company Limited, for I have once explained the reasons in one of my articles. He never became himself when the Ghanaian nonsensical "order from above" was invoked by Rawlings through the Internal Revenue Department to strengthen the dirty hands of J.J. Rawlings to confiscate the privately established and privately owned company to the State, during the madness of the Provisional National Defence Council (PNDC) regime.

A few years tax rebate granted to the then infant industry by General I. K. Acheampong's Supreme Military Council 1 government was seen by Rawlings through the instigations of P. V. Obeng as tax evasion, after B. A Mensah rejected Paul Victor Obeng's attempts to become a shareholder in the company.

I am the son-in-law of B.A. Mensah's deceased elder brother so I know what I am talking about. Anyway, Mr. Benjamin Amponsah Mensah unlike most of the selfish rich men in Kumawu ensured his relatives and even outsiders closer to him did profit from his riches and largess.

This act of his, do I today recommend to the few rich people still alive and originating from Kumawu traditional area. His act is worthy of emulation. I am waiting to see how they can make members of their own families rich so that the crumbs falling off the table can reach Rockson, that fiery fighter of truth, justice and equality for Ghanaians, especially, the inhabitants of Kumawu traditional area.

In the meantime, I invite all Ghanaians to mourn with Kumawuman on the loss of their bold and philanthropic son of the soil. My heartfelt condolences to Madam Abena Apomasu, Justice Barbara Mensah, Herbert Mensah, Maame Nkrumah, Mr. Sarfo, Lawyer Basoah, MP Phillip Basoah, Osei Kwame (my senior at Tweneboah Kodua Secondary School in those heydays) and the entire citizens of Kumawuman and NPP faithful across the world. I nearly forgot about Madam Akosua Amponsah in Ottawa, Canada, the daughter of the late Opanin Kwame Agyare, B. A Mensah's elder brother.

Some of my Kumawu compatriots may be ashamed of me the way I come down hard on the socio-economic saboteurs of Ghana. I am sorry, that is the way I have intentionally chosen to be and remain until our leaders begin to behave as rational human beings but not as irrational wild beasts living in the jungle where the golden rule is, "The survival of the fittest".

I do not countenance evil, stupidity, and sheer daylight robbery as effectuated by for example, one Alfred Agbesi Woyome, that Ghanaian notorious fraudster of the Century.

I am really sorry to have chosen this platform to express my heartfelt condolences to the bereaved family of B. A Mensah. All those who may feel hurt because of my harsh words used in my write-ups especially, on this occasion of mourning a dedicated son of Kumawu soil, I say, I am sorry. I have always come to believe that "Hard words do not break bones" though they hurt as truth does, they bring comfort in the end.

May the souls of B.A. Mensah and Ama Omenaa rest in perfect peace. Ama, the daughter of the late Opanin Kofi Fofie of Kumawu Zongo also passed about a month ago.

Will DJ Sources of Sources radio UK Fm96.3 play dirges for Kumawuman citizens? We live to see how he will assist us as a faithful member of the NPP, I suppose. Locate Sources radio online by visiting modernghana.com