Court Orders GSA To Sit Up 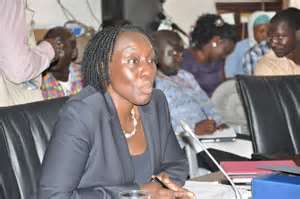 A Fast Track High Court on Tuesday ordered the Ghana Standard Authority (GSA) to expedite action on the report on 372 bottled substances suspected to be cocaine with the street value of $12 million seized recently from two Nigerians.

The order came after prosecution had told the court that they had not received the results on drugs from the GSA. According to Mr. Asiamah Sampong, Principal State Attorney, the prosecutor, they were waiting for a confirmation of the field test conducted on the substance and pleaded with court for time.

Mr. Emmanuel Effah Annor, counsel for Eke, expressed concern over the slow pace at which the trial was going, adding his client had a serious medical condition and prayed the court to order prosecution to fast-track their processes. Mr. Annor also prayed NACOB to speed up their investigations so that the trial could start.

James Ekeke Chukwu and Sammy Ikechekwu Benjy Eke, both businessmen, are being held for engaging in criminal conspiracy and importation of narcotics without authority.

Eke was additionally charged for possessing 62 boxes containing 372 bottles of liquid substance suspected to be cocaine. The court, presided over by Mr. Justice Mustapha Habib Logoh, is yet to take their pleas. They have been remanded till March 26.

Mr. Asiamah Sampong, the Principal State Attorney said in December last year the Narcotic Control Board (NACOB) through its foreign counterpart received an intelligence report that a cargo said to be containing quantities of cosmetics from Bolivia to Tema Port had narcotic drugs concealed in them.

On January 29, the cargo, which was consigned to a company called Consumables Lines Limited, arrived at the Tema Port. Officers of the Joint Port Control Unit (JPCU) mounted surveillance on the cargo in a 40 footer container with Number MRK 257 48-45 GI belonging to Maersk Shipping Line Company.

Prosecution said on 2ndFebruary, 2013, two clearing agents and witnesses in the case arrived with the necessary documents to clear the goods. Inspection of the import documents suggested that the cargo was billed to contain 22 pallets of assorted cosmetics.

According to prosecution, the container arrived with the seal number ML 014986 intact, and the container was opened for inspection in the presence of the agents. During physical examination of the goods, green bottles of liquid substances, suspected to be cocaine, were found sealed in surgical gloves.

The clearing agent denied knowledge of the narcotic drugs and the cargo, but another agent told investigators that a second hand cloth dealer who was a client to Chukwu, who introduced Eke to her as an importer of cosmetic products, wanted his goods to be cleared for him.

The agent further stated that she was therefore presented with the necessary documents in her office by the two accused persons and she (the agent) was formally engaged to clear the goods.

Prosecution further said investigations led to the arrest of Chukwu at Aplaku Junction, near Weija, when he attempted to take delivery of the cargo.

Prosecution said Chukwu mentioned Eke as the owner of the container and stated that sometime in 2011, Chukwu told him (Eke) that he had the desire to import cosmetics from South America to Ghana.

Based on that Chukwu said he assisted Eke to register a company known as Consumables Lines Limited at the Registrar General's Department.

Prosecution said Chukwu stated that in December 2012, Eke came to him with the import document of the cargo which was on the high seas from Bolivia to Tema.Eke was lured into the country and he blamed Chukwu and two others for concealing the drugs in the cargo of cosmetics.

Investigation led to the retrieval of 180,600 CFA, 18,700 dollars, 3,945 Naira and GHc680 from Eke, while GHc2, 150 was found on Chukwu. Prosecution alleged the monies were believed to be proceeds from the sale of narcotic drugs. Prosecution further stated that the substances had been forwarded to the Ghana Standards Authority for analytical examination.

In another development Menergy, an Oilfield Services Provider is praying the Sekondi High Court One to help the company secure its GH¢5.2 billion land and other properties from the Social Security and National Insurance Trust (SSNIT).

The properties, which were originally owned by Ghana Railways Company were sold by SSNIT after a court gave the go ahead to defray a GH¢12.8 million debt owed to SSNIT in terms of non-payment of workers contributions.

After the court adjourned the case to April 18, Mr. Michael Owusu-Awuah, Menergy Company Lawyer, told reporters that the company bought the property on July 22, 2010 when SSNIT auctioned it and had been issued a purchase certificate.

He expressed wonder why Railways Company is claiming possession of the facility, which had already been sold on a court order by its debtors. Mr. Owusu-Awuah said it, therefore, came as a surprise when Menergy, the new owners of the facility were prevented by the Acting Manager of Railways Company and some Police Personnel when they attempted to pull the Railways Transit Quarters and other adjourning facilities on February 6 to make way for new projects.

'The Acting Manager has a contempt case pending against him,' Mr. Owusu-Awuah said. GNA