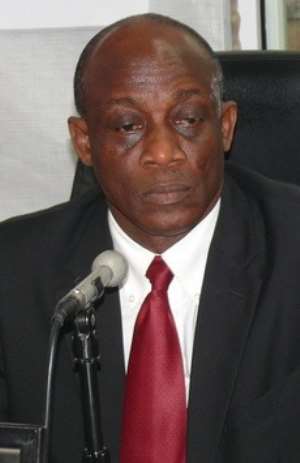 Permit me, readers, to take you back into last year, in the heat of the 2012 election campaign when Dr. Mahamudu Bawumia held a press briefing to challenge government's policy direction, and in so doing, questioned the truth and calculation of the much trumpeted single digit inflation against a background of high interest rate being experienced in the country and the consequent attacks on Dr Bawumia's competence by Dr Tony Aidoo, the Statistical Services Department and government spokespersons. Fast forward to today 2013, the NDC and its babies with sharp teeth keep making the same corny argument that they attacked Dr. Bawumia's credibility and authority on the subject with then.

I listened to Felix Ofosu Kwarkye, a leading communicator for the NDC government on the popular Newsfile program, (Joyfm 23/2/13) defending the very high interest rate in Ghana in the face of a single digit inflation and even said the two were indeed, separate economic policy instruments.

Again, as if by a well rehearsed party formula or strategy, the current minister for information, Hon. Mahama Ayariga also put up this same over whipped and illogical answer of theirs in answer to Hon. Nana Akomea, on Newsfile, last Saturday the 9th March 2013, and even offered to teach him (Akomea) their ill advised model answer to why Ghana has such a high interest rate when they say our rate of inflation is in single digits, albeit admitting to his own limited knowledge of economics.

In Hon. Ayariga's desperate attempt to further expose his very own and the NDC's lack of understanding of the core issues that have led to the current high interest rate at 23.1%, stemming from their desire to portray a false sustained single digit inflation to Ghanaians, he sought to show his government off as most credit worthy and why it is that it has crowded the private sector, the engine of growth in any developing economy, out of the local capital market, currently at 55% of our GH33.5 billion public debt.

Thereby, justifying government's over crowding and chasing loans from the local financial market hence, not only pushing up the demand for cash that raises the interest rate but takes financial capital acquisition from those same sources from the private industrialist for business development, to rates way above their ability to borrow, let alone be able to make good any repayments since their businesses fail, as a result of government's irresponsible borrowing from the local market.

Can the Hon. Minister honestly tell Ghanaians, what high yielding and credible business his government is engaged in, that would enable it repay all the loans it is crowding out the private investor for, particularly at the going high interest rates, and more so when the bulk of these monies are spent not on productive developments?.

When government, due to its “credit worthiness” monopolises all the money available for the private investor, thus killing off the country's engine for growth and development, with factories folding up and laying off employees who are then left with no money to spend on goods and services in the economy, affecting their wellbeing as well as those of their dependants.

The above acts make the NDC an ostrich government because the average consumer is no longer able to effectively make demands for goods and services, their known way of easing inflationary pressure, to maintain a stable single digit. This explains why both that (single digit inflation) has failed to reflect in the pockets and lives of the average Ghanaian and high interest rates that is collapsing the economy through business closures.

Single digit inflation, but NO MONEY TO BUY FOOD and crowding out private businesses to achieve this dubious sense of a stable inflation, Hon. Ayariga, is what has shot interest rates so high and WHY your government cannot seem to do anything about the situation, because either way you try to stop it, the NDC would be cutting its nose to spite its face.

Ghanaians dare your government to stop suffocating the private sector of local financing for them to do productive business, pay workers etc and your fake single digit fish would be blown out of water, for a real inflationary trend and interest rate would surely drop to affordable rates for doing business, just get out of the local capital market and see, while prudently managing what monies government has already contracted.

Did I hear the Hon. Minister say, on the said program, that, the bank managers are business men?.

Sure they are Mr. Minister, when your government would accept loans at any rate of interest and we would have as a people, to pay in the future whether it is prudently used or not and the banks would be saved a whole department for monitoring, advising, and working alongside client businesses to achieve maximum and efficient use of such loans, and in any case, Hon. Minster, wouldn't they serve the nation better if they weren't chased by your cash drinking government, so they could focus on investing in the growth of local businesses for the wellbeing of the economy and all Ghanaians than such monies being given to only a few people in government to pocket?.

Surely, the two; inflation and interest rate are not different economic tools, that is only a creation in the N|DC's mind, indeed a stable inflationary rate and low interest rates are both achievable at the same time.

Get the NDC government out of the local money market, prudence in the use of what resources it currently has and banks would bring down interest rates to leverage private enterprise customers, whose productive activities would ease pressure on inflation.