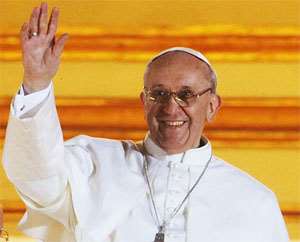 Pope Francis has begun his first day at the helm of the Catholic Church, attempting to set out his vision for his papacy amid a testing schedule.

He will lead cardinals in his first Mass, begin appointing senior Vatican staff and may visit his predecessor, Benedict, Pope Emeritus.

The first Latin American and Jesuit pope has received a flood of goodwill messages from around the world.

But the Argentine also faces a series of tough challenges.

The Church has been dogged by infighting and scandals over clerical sex abuse and alleged corruption.

“He spoke to us cordially like a father,” Reuters news agency quoted Father Ludovico Melo, a priest who prayed with the Pope, as saying. “We were given 10 minutes' advance notice that the Pope was coming.”

'Journey of love'
The election of Cardinal Jorge Mario Bergoglio shocked many onlookers when it was revealed on Wednesday.

Although he reportedly came second to Pope Benedict XVI during the 2005 conclave, few had predicted the election of the first pope from outside Europe in 1,300 years.

Pope Francis will return to the Sistine Chapel on Thursday afternoon, scene of his election, to celebrate Mass with the cardinals.

Over the weekend, he will meet the world's media at a special papal audience, an opportunity perhaps to set out some of his global vision, says the BBC's diplomatic correspondent, James Robbins, in Rome.

Pope Francis had been greeted by crowds roaring their approval when he appeared at the balcony overlooking St Peter's Square on Wednesday evening, about an hour after white smoke rose from the chimney of the Sistine Chapel to announce to the world that a new pontiff had been elected.