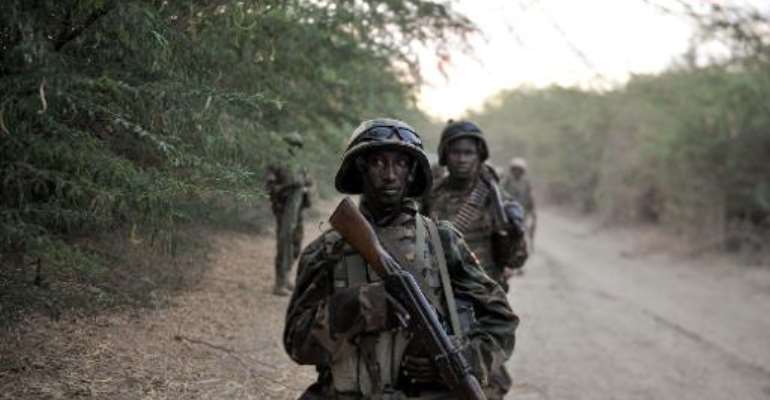 Ugandan soldiers of the African Union Mission in Somalia take a break as they march toward the town of Qoryooley, on March 22, 2014, during an offensive to take the town back from Shebab militants. By Tobin Jones (AU UN Information Support team/AFP/File)

Mogadishu (AFP) - Somalia's government is celebrating the capture of a string of towns from Al-Qaeda-linked Shebab rebels, but the Islamists say they will retaliate and warn the "war is far from over."

A UN-mandated AU force, known as AMISOM, has been battling Shebab militants in Somalia since 2007, but in early March troops in tanks and armoured vehicles began a fresh push, boosted by recent Ethiopian reinforcements.

Foreign special forces, reportedly including US-operated surveillance drones, are supporting the advance, according to security sources.

But the Shebab have vowed to retaliate against the troop-contributing nations, with soldiers in the 21,000-strong force coming from Burundi, Djibouti, Ethiopia, Kenya, Sierra Leone and Uganda.

"They will turn in their graves," top Shebab commander Sheikh Hassan Yaqub told AFP, scoffing at the advances hailed by government and AU.

"The enemies of Allah are entering towns... but they don't have the ability to control them," Yaqub added. "The large territories they have passed through between towns is already back in the hands of the mujahedeen fighters."

The gunmen have largely fled ahead of the assaults, only to later stage guerrilla attacks, with AU forces especially vulnerable without helicopter air support and supply lines stretched.

AU troops are pushing hard to seize towns ahead of heavy rains expected later in April, but security sources say they still have far to go.

"It's a major offensive, the latest in several, but it can't move too fast as it is already exposed to attack," one foreign security expert focused on Somalia said.

"It is the expected challenge of a regular military force trying to combat an insurgent force that simply melts away into the population."

Shebab-held territory has been cut, but vast areas remain under their control, including over 200 kilometres (125 miles) of coastline in Somalia's far south, including the port of Barawe, a key target of AU troops.

The UN envoy to Somalia, Nicholas Kay, said in a recent interview that Shebab fighters "have become more active" as military assaults drive them from key bases, prompting them to stage attacks in Mogadishu, as well as other countries in the region such as Uganda and Kenya.

"They feel threatened and endangered, and so they have carried out significantly more terrorist attacks in Mogadishu in the last couple of months," Kay said.

Shebab fighters have ordered residents of towns to leave with them as AU troops advance, and remain close by to the towns, ready to strike.

"Al-Shebab ordered everyone leave town... their message was clear, leave with us or die," said Mohamed Malim, a resident in Wajid district, where Ethiopian troops with the AU force have been fighting.

In Qoryooley, a southern town seized last month from the Shebab, residents say the Islamists remain just on its outskirts.

"They carry out attacks almost every night and day, we hear explosions and gunshots," resident Hussein Muktar said.

Washington has put multi-million dollar bounties on several top Shebab commanders, including foreign fighters from regional nations, the US and Europe.

As their territory shrinks, security sources report some senior Shebab members are fleeing to mountains in northern Somalia's Puntland region, while some foreign fighters are expected to possibly seek to cross to Yemen, or flee southwards into neighbouring Ethiopia and Kenya.

"They will have nowhere to hide and the only option they have is to surrender," AMISOM spokesman Deo Akiki said.

But Somalia's government admits taking towns will not end Shebab attacks, with the gunmen abandoning fixed positions in Mogadishu in 2011 but still staging daring suicide raids, including on the presidential palace and on United Nations offices.

"We will soon liberate the remaining towns... it doesn't mean that their heinous bomb attacks will stop, but they will be less," Bare, the interior minister, said.

The Shebab however have shown in the past their ability to hit back.

Kenya has suffered a string of attacks blamed on the Islamist insurgents, including the September massacre in Nairobi's Westgate mall in which at least 67 people were killed.

Shebab bombers also killed at least 76 people in restaurants in the Ugandan capital in 2010.

"This war is far from over," Yaqub added, calling on the people to "defend their religion from the invaders".

"They are trying to extinguish the light of Islamic law in Somalia, but I tell you they have started a war they cannot end," he said.