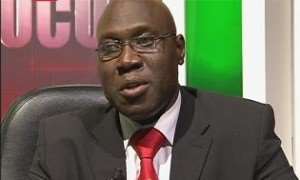 The Minister for Lands and Natural Resources, Alhaji Inusah Fuseini has reiterated government's commitment to flush out all unauthorized Chinese miners and other illegal operators in the small mining sector in Ghana to avert the looming environmental crisis.

According to him, Ghana has forged an enviable bilateral relations with the Republic of China and Ghana, we  will therefore not allow a illegal Chinese miners to jeopardize or mar a flourishing friendship which has provided immense benefits to both countries particularly Ghana.

The sector Minister for Lands and Natural Resources who is also the Member of Parliament (MP) for Tamale Central therefore advised Chinese miners to initiate steps to secure appropriate license to establish legitimate large scale enterprises in Ghana and revealed that some Chinese companies have already  been granted  exploration licences.

Alhaji Fuseini gave the warning when His Excellency Gong Jianzhong, Chinese Ambassador to Ghana, paid a courtesy on him to congratulate him on his appointment as sector minister. He was accompanied by Mr. Yu Jie, Head of the Political Section of the Chinese Embassy in Accra.

The Minister intimated that Ghana cherishes its excellent relations with the Republic of China forged in the early post-independence era between Osagyefo Kwame Nkrumah and Chairman Mao and revealed that Ghana was taking lessons from the social development strategies pursued by China in a bid to replicate the unprecedented growth experienced by the Republic  of China in Ghana.

Alhaji Fuseini  lauded  the government of China for  the substantial contribution   it continues to make towards the development of Ghana and   cited the construction of the  Asogli  Power Plant, Atuabo Gas plant the  numerous  water systems provided for many rural communities  a few examples of Chinese development assistance to Ghana.

H.E. Jianzhong called for a very comprehensive strategy that which could include a moratorium that will prohibit local miners/chiefs from selling their small scale mining licenses and lands to these illegal Chinese miners, critical evaluation of the operations of holders of small scale licenses issued by the Ministry as well as an effective mechanism to protect farmlands to help address the galamsey menace in a holistic manner.

Briefing  the Minister on a number of initiatives undertaken  by the Chinese authorities to stem the tide, the Chinese envoy revealed  that  his government has embarked on  an elaborate education  campaign to  caution Chinese miners which hail mostly   from the Shanglin county in Southern China to  refrain from travelling to Ghana to engage in illegal mining.