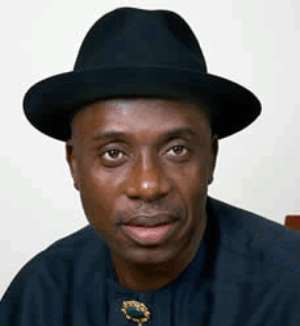 The party believes Governor Amaechi merely used the forum outside the shores of Nigeria to misinform participants who are disconnected and unaware of the real situation in Nigeria.

The statement signed by the ACN publicity secretary, Jerry Needam challenge Governor Amaechi to convene a genuine stakeholders forum in the state where his claim of wealth creation and entrepreneurship scheme will be presented, rather than going abroad to lay claim to projects that are non existence in the state.

We further challenged the Governor of Rivers State to publish names of beneficiaries of his wealth creation and entrepreneurship initiative if his claims in London are anything to go by.

This is grossly below average and insignificance considering the huge and embarrassing number of idle persons in the state.

Although, regrettable, but the stomach bug that prevented Queen Elizabeth from attending the Forum where Amaechi made his presentation actually safe Her Majesty from swallowing more lies and contaminated facts capable of heightening the stomach ache.

To us, the Commonwealth Forum only gave Governor Amaechi an opportunity to present an unrealistic, doctored and unfounded scorecard and programmes that are non-existence or non effective and inefficient in the Rivers State.

Of great worry also is the fact that the so called Rivers State Sustainable Development Agency, RSSDA only functions as a conduit pipe through which the government misappropriated Rivers peoples money on phony and white elephant projects.

We urge the Governor to demonstrate genuine commitment to the development of the state than making bogus claims abroad when things on ground do not reflect such claims.