Why Cardinal Appiah Turkson May Not Be Pope 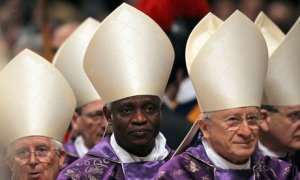 While we await the white smoke from the Sistine Chapel is announcing the election of a new Pope, hoping that the next name we hear is Cardinal Peter Appiah Turkson, we would advise Ghanaians and other Africans to be cautiously optimistic.

We know everything is in his favour. We hear he's well-liked within the College of Cardinals and known as a a great communicator. His age may also count in his favor — at 64, he is over a decade younger than Benedict was when he became Pope.

The bookmakers might have named him as a favorite but the Holy Spirit as the Cardinal himself and the other Cardinals have said does not work through bookmakers. The Catholic church , a secretive church would rather settle for another candidate than have the bookmakers got it right.

There is also the bigger issue of the growth of the Catholic Church- it is definitely not growing in Africa. The Charismatic and the Pentecostals have taken half their members and counting.

Forty percent Catholics live in Latin America, and the Church is growing over there. It would make sense to have a Pope from that part.

And there are those interviews Cardinal Turkson granted to some networks, on his position on homosexuality.

The UK Guardian's Andrew Brown writes “he has managed to offend both factions of the American church: the right suspect him of sympathy with the victims of capitalism and the left has been scandalized by his remark that the African church has been spared sex abuse scandals in part because of the very strong cultural taboos against homosexuality. Quite apart from any question of homophobia, his theory is nonsense empirically.

If strong cultural taboos against gay people protect the church from scandal, how to explain Ireland in the 1960s and 1970s? No, if Americans want a candidate from the developing world, they are much more likely to put weight behind a Spanish-speaking one from Latin America or the Philippines.”

We cannot also gloss also over the issue of race. We cannot pretend the Cardinals are color-blind, race is is being considered right now, under the frescos Michelangelo painted as you read this. And there are a number of Italians and Europeans who are God-fearing, loving and still color-sensitive.

A Black Pope would be great, if Cardinal Turkson with his conservative views becomes a Pope, none would be happier than us but until that surprise, let us pray for him.